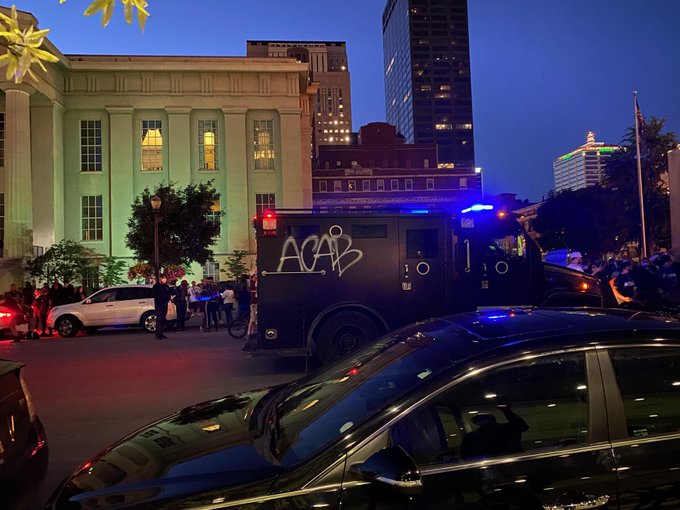 Chaos has broken in Louisville, Kentucky, one night after seven protesters were shot while people attempted to flip a police vehicle.

Vandalism is taking place all over the city, including at the Police Department.

Red hand prints are on the Hall of Justice. #Louisville pic.twitter.com/eN7EwR6EBm

One rioter broke the hand off of the iconic King Louis XVI statue downtown.

A protestor (at an overwhelmingly peaceful protest) in downtown Louisville has made off with the hand of the King Louis XVI statue pic.twitter.com/vnkq1xWvgQ

Video sent from a friend in #Louisville following the death of #BreonnaTaylor pic.twitter.com/DEZLnbRcTe

A local news reporter was also shot with pepper balls while doing a live segment from the front line.

This just happened on live tv. Wow, what a douche bag. pic.twitter.com/dQKheEcCvb

Riots are taking place across the nation after a black man was killed while in Minneapolis police custody on Monday, despite the fact that the officer involved was promptly fired and charged.

The Louisville protesters are rioting “in honor” of a woman named Breonna Taylor who was killed by police during a raid on her home in March.

Seven rioters were shot on Thursday night in the city.

Another angle of the shooting in #Louisville. pic.twitter.com/JDREEURNgf

Rumors quickly circulated on Twitter that police had fire the shots, but the department has said that this was not true.

“There have been some arrests, but at this time we are not able to tell you how many as the situation is ongoing,” a statement from department spokeswoman Alicia Smiley to the Courier Journal said. “Information on those arrests will be available tomorrow through court records of the arrests.”

She added that police did not fire their weapons.