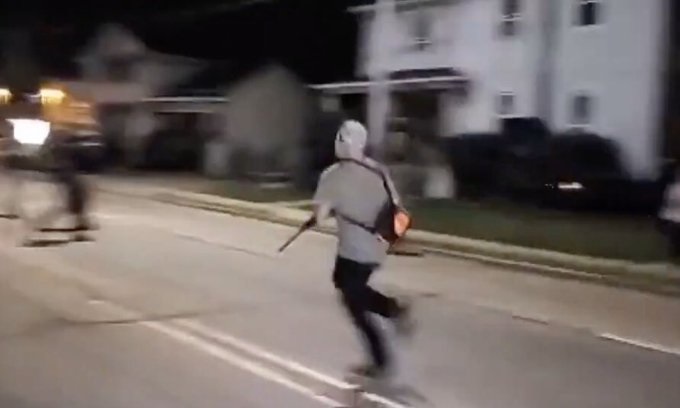 Multiple people are injured and there are reports of “numerous shootings” during Tuesday night’s riot in Kenosha.

Independent reporter CJ Halliburton said that “people are getting shot all around us” during his livestream as gunshots rang out.

The scene was so bloody that YouTube began censoring the livestreams.

Blaze reporter Elijah Schaffer was on the scene and tweeted video of someone who had been shot in the head.

“I can not confirm the exact wound location but he’s white and losing a lot of blood,” Schaffer wrote.

I will update who shot him! pic.twitter.com/xZ6v5mpI82

Schaffer tweeted that a witness at the scene said that the shooters were with a militia that was out protecting a business that was being destroyed. He added that he was leaving to go back to his hotel because there were drive by shootings happening and it was no longer safe to cover the situation.

A second witness told me the same account off camera

That is what I thought I saw too but I had to confirm. Details can still change pic.twitter.com/3CnPtODX5o

Details of who was involved in the shootings are currently unclear. There were rioters, anti-riot militias, armed neighborhood patrols, and other groups all out in the city with weapons.

There are initial reports that an officer was also injured during the chaos and mayhem.

Reports of an officer down. https://t.co/4DlxKFWvnk

Prior to the shooting, things became extremely confrontational between rioters and militia members at a gas station nearby. A man who was shot may have been seen in the video from the gas station moments before.

Reporter Drew Hernandez who is on the scene wrote that “it appears an armed citizen was defending the car dealership and opened fire on the rioter who was attempting to vandalize or burn the dealership down.”

“Before this shooting took place, the rioters were planning to burn down their ‘next car dealership.'”

Before this shooting took place, the rioters were planning to burn down their “next car dealership”

The Kenosha rioters have lit multiple car dealerships on fire in the city over the last three days. The exploding vehicles nearly burnt down an adjacent church on Monday.

Fires create their own weather systems ..

The church adjacent to the car dealership is about to catch fire in #kenosha pic.twitter.com/TwzMwf1e4m

UPDATE: There are now reports that there were “numerous shootings.”

Numerous shootings in #Kenosha independents @CjHalliburton and Regg Inkagnedo caught it all on tape.

Rioter was just shot in the head tonight in #Kenosha

This situation is currently unfolding. The District Herald will continue to provide updates as more information becomes available.