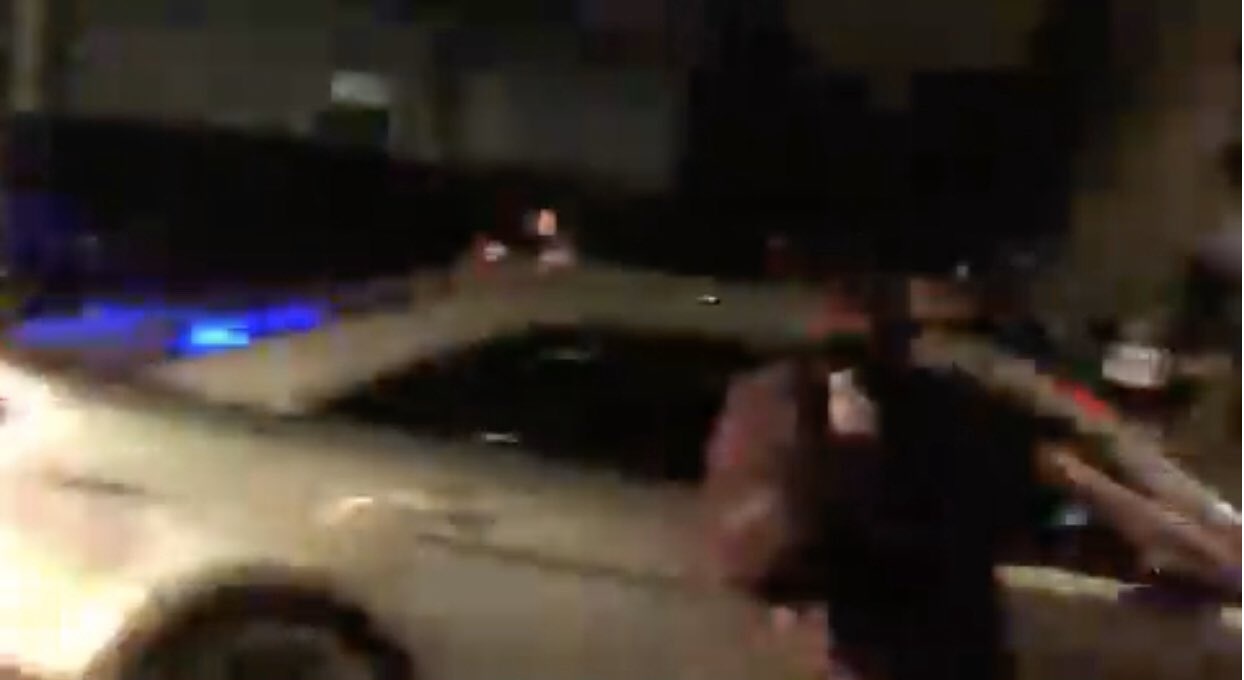 A police officer driving through the riot in Brooklyn opened his passenger side door and whacked what appeared to be a member of Antifa with it.

The rioters had been throwing cement at the police, lighting fires, and causing other destruction.

Police car just drove by demonstrators on Classon Ave in Brooklyn — some of whom had been throwing cement — and opened passenger side door into a protester. pic.twitter.com/vd8Lq60TXC

The riot in Brooklyn is being described as “mayhem.” Thousands of people are currently out rioting in the city.

Protesters have reportedly charged the police station and a police van was also set on fire.

“Several hundred police officers were rushed to the 88th Precinct in Clinton Hill, where protesters tagged police cars with profane graffiti like ‘F— the police,’ broke their mirrors, and wrecked them,” the New York Daily News reports.

None of the rioters made it inside the building, unlike in Minneapolis.

Breaking: Rioters have set a police van on fire in the Brooklyn area of New York City. pic.twitter.com/nWdcLfEePU

The NYPD has had a much more… hands on… approach than other departments across the nation, many of whom faced stand down orders.

In a video posted to Twitter earlier today, NYPD officers could be seen whacking the rioters with batons.

Unrest began to spread at Barclays Center in NYC 20 minutes ago. That means the situation before nightfall is at risk of spiraling in Atlanta, DC, NYC, Minneapolis, and possibly LA and Houston as well. #GeorgeFloydProtests pic.twitter.com/1YA2IS52ve

Another officer shoved a belligerent woman to the ground, leading to her seeking medical attention.

Young woman violently shoved to the ground during confrontation with NYPD officer in Brooklyn; she was reportedly taken to the hospital and is OK

“A cloud of pepper spray descended over the rally, police armed with batons violently took down protesters and some rally goers set fires — all scenes that played out in real time on social media,” the Patch reports.

Assemblywoman Diana Richardson was among the protesters who was pepper sprayed.

There have reportedly been hundreds of arrests in the city, though police have not yet released an official number.

“Looks like things are getting really bad tonight in #Brooklyn. I haven’t seen a single cable news outlet do a live stream from New York tonight. Why? #NYPD @NYCMayor what’s your plan to address this?” a Twitter user named Kristen Ruby tweeted.

Looks like things are getting really bad tonight in #Brooklyn. I haven’t seen a single cable news outlet do a live stream from New York tonight. Why? #NYPD @NYCMayor what’s your plan to address this? pic.twitter.com/KgcwInUj4X

Violent riots have been sweeping the nation for several days over the death of a black man in police custody in Minneapolis on Monday. There are currently ongoing riots in Minneapolis, New York, DC, Bakersfield, and multiple other cities.

Driver Plows Through Crowd of Protesters in Bakersfield, California