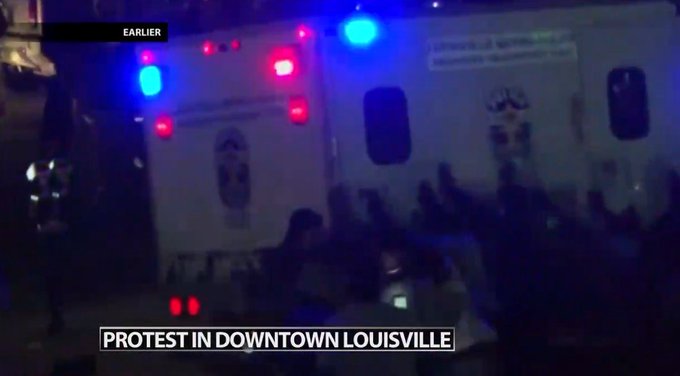 At least seven protesters have been shot in Louisville as an attempt was made to flip a police vehicle on Thursday evening.

It has been confirmed that one of them is critical, but the condition of the others is not yet known.

There has been violence, riots, looting, and arson across the nation as people protest the death of a Minneapolis man in police custody on Monday.

Rumors quickly circulated on Twitter that police had fire the shots, but the department has said that this was not true.

“There have been some arrests, but at this time we are not able to tell you how many as the situation is ongoing,” a statement from department spokeswoman Alicia Smiley to the Courier Journal said. “Information on those arrests will be available tomorrow through court records of the arrests.”

She added that police did not fire their weapons.

….These THUGS are dishonoring the memory of George Floyd, and I won’t let that happen. Just spoke to Governor Tim Walz and told him that the Military is with him all the way. Any difficulty and we will assume control but, when the looting starts, the shooting starts. Thank you!

Another angle of the shooting in #Louisville. pic.twitter.com/JDREEURNgf

The Louisville protest was over a woman named Breonna Taylor who was shot by Louisville police in March during a raid at her home.

The family of Taylor has called for people to stop rioting and go home before more people get hurt.

“Louisville, thank you so much for saying Breonna’s name tonight. We are not going to stop until we get justice,” a woman says in a video tweeted by Louisville Mayor Greg Fischer. “But we should stop tonight before people get hurt. Please go home, be safe and be ready to keep fighting.”

A message from Breonna Taylor’s family urging protestors to be peaceful, go home and keep fighting for truth. pic.twitter.com/if5MH5UcCW

Approximately 500 people marched through the streets before getting into a standoff with police.

BREAKING: #Louisville, reports of at least two people shot, police have deployed tear gas. This is where #BreonnaTaylor, a Black woman, was murdered in her home by police. #BlackLivesMatter protestors are demanding justice. pic.twitter.com/h7vMxn9SFU

“Meanwhile, live video from downtown Louisville around 12:30 a.m. shows some protesters behind makeshift wooden barricades, which appeared to be made out of picnic tables spray-painted with the words “You can’t kill us all.” Police in body armor and face shields held batons and lined up around Louisville City Hall. They appeared to fire rubber bullets and deploy tear gas canisters, fogging the air and inducing coughs among the remaining members of the crowd,” ABC7 reports.

The protest was ongoing after midnight on Friday morning.

Driver Plows Through Crowd of Protesters in Bakersfield, California