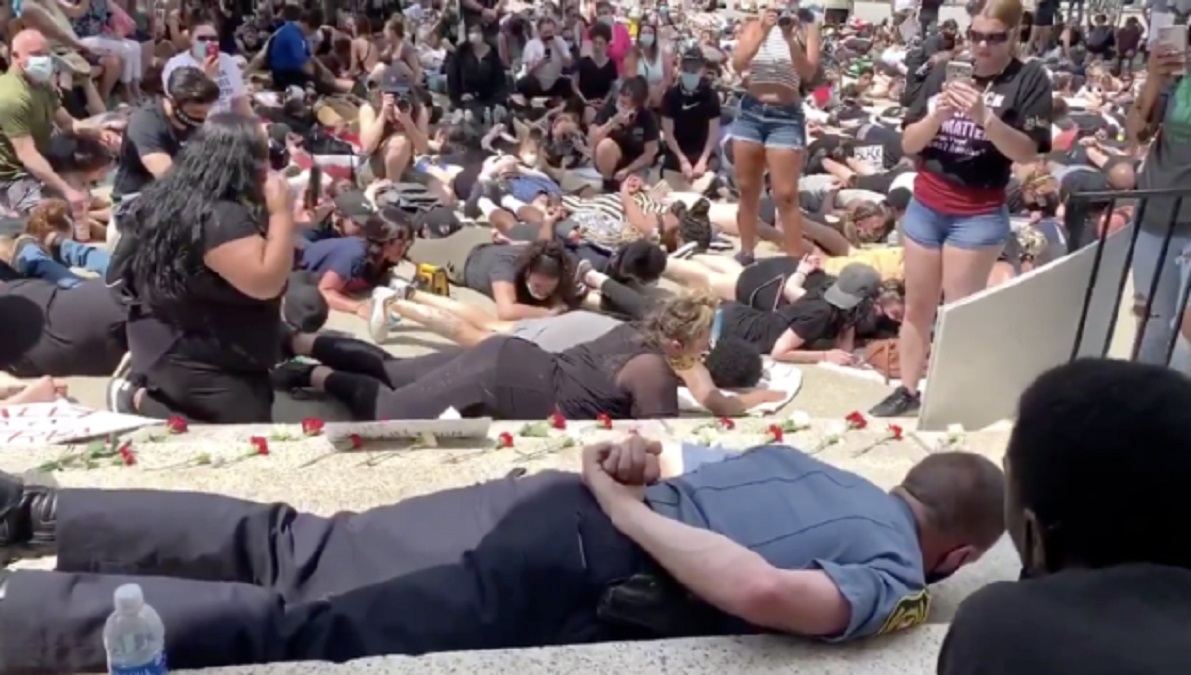 The Webster police chief was filmed prostrating his entire body on the ground in submission for anti-cop protesters in Massachusetts on Saturday.

Police Chief Michael Shaw laid face down on the ground for eight minutes with the protesters who were screaming George Floyd’s last words.

The startling images show him laying on the ground with several protesters sitting behind him.

In an incredibly powerful moment, Police Chief Michael Shaw, urged by chanting, joins the crowd laying face down on the pavement @telegramdotcom pic.twitter.com/nkuDPeODzo

Chief Shaw also spoke at the protest, which was attended by several hundred people.

“You know who hates bad cops as much as you all?” Chief Shaw asked the crowd. “Good cops.”

The chief went on to say that all the officers in attendance were “sickened” by what they saw during Floyd’s death in police custody, because they are “good cops.”

“We try to do as much as we can with the community,” he continued, “but you know what? We can do better.” He added that “your message is heard loud and clear.”

“I was glad to be able to be a part of the planning of this,” Shaw said. “The collaboration of everyone helps lead to a safe event for them, and protects the community.”

Law Officer reports that “last week, Webster police posted on Facebook that it was ‘abhorred by the actions of the former Minneapolis Police Officers and how they treated George Floyd.'”

Protesters and rioters nationwide have urged police to join their protests against their profession by taking a knee. Many have done it, but Webster Police Chief Shaw took it to a whole new level.

In Lowell, Massachusetts, a more dignified cop outright refused to take a knee.

The protesters demanded he take a knee, saying things like “show us you’re with us,” to which the cop simply replied “nah.” The crowd began wildly chanting for him to do it, pretending that they were asking him to join them in prayer.

The officer held his ground and refused to capitulate.