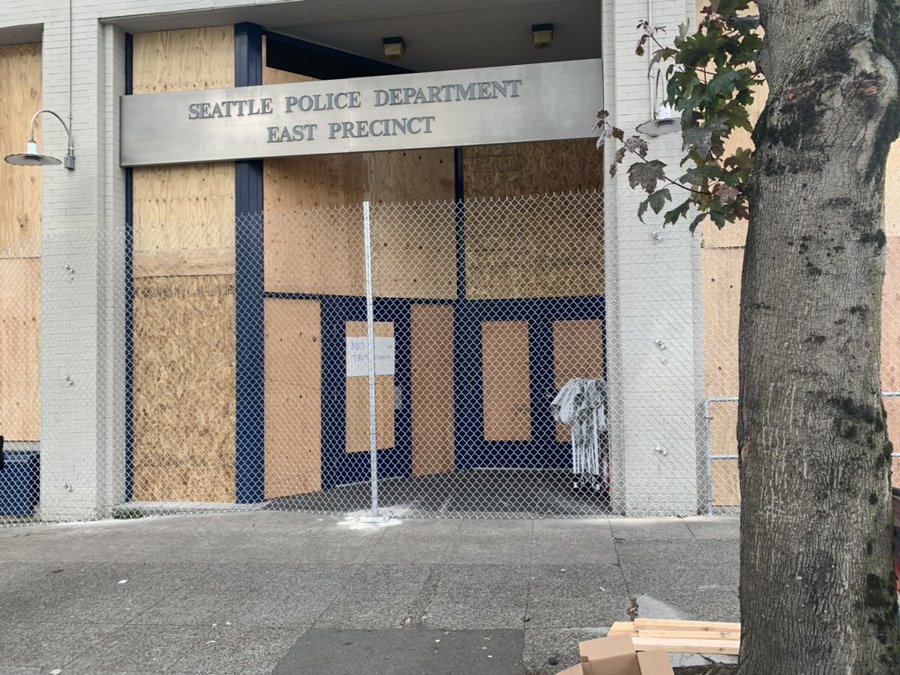 Seattle’s East Precinct has been boarded up and abandoned as riots continue in the city.

Rioters stormed and looted a Minneapolis Police precinct after it was abandoned on May 29.

Local reporter Brandi Kruse tweeted that “after days of rumors, three police sources confirm preparations are underway to abandon East Precinct. Items of value will be taken out and building will be secured as best they can.”

“Note that this is all in preparation. They do not want to give up building and they’re not just handing it over. They are preparing for event it could happen and making sure proper steps are taken to safeguard what’s inside,” Kruse continued.

Note that this is all in preparation. They do not want to give up building and they’re not just handing it over. They are preparing for event it could happen and making sure proper steps are taken to safeguard what’s inside.

The brother of Nikolas Fernandez, a man whose car was mobbed by rioters leading to him non-fatally shooting one of his attackers, reportedly has a brother who works at the East Precinct.

Fernandez promptly surrendered to police and has not been charged, but is being held on investigation of assault, according to a report from Capitol Hill Seattle.

Fernandez told police that he had been in the area and thought that he could get through the intersection where the mob had gathered, but soon the crowd began yelling at him, kicking his car, and trying to grab him through his open window. He said that the person he shot had been grabbing him and his steering wheel through the window, prompting him to fire a single shot.

When asked why he shot the man, Fernandez told the officer that he was being barricaded by everyone and feared for his life.

“Fernandez told police his vehicle stalled Sunday night and wouldn’t start after the shooting so he ‘exited the car with his gun in his hand yelling at people to get back away from him,’ police write. Fernandez told police he ran through the line and immediately surrendered,” the Capitol Hill Seattle report explains.

“Fernandez said his brother works here at this precinct, and he does not want to do anything to shame him,” police wrote of the incident.

Seattle Police Chief Carmen Best called abandoning the building an exercise in “trust and de-escalation.” She also announced that some barricades will be removed and fewer officers will be in area. She said that she is hoping marchers proceed peacefully.

TONIGHT’S PLAN: Chief Carmen Best calling this an exercise in “trust and de-escalation.” Some barricades will be removed near East Precinct and fewer officers will be in area. She’s hoping marchers proceed peacefully. #seattleprotest #seattleprotests #seattle #CapitolHill pic.twitter.com/l07hptl78u

Seattle has been a hot bed of riots since the death of a black man in Minneapolis police custody nearly two weeks ago.

The Minneapolis Police precinct that was abandoned was ransacked by rioters before being set on fire.