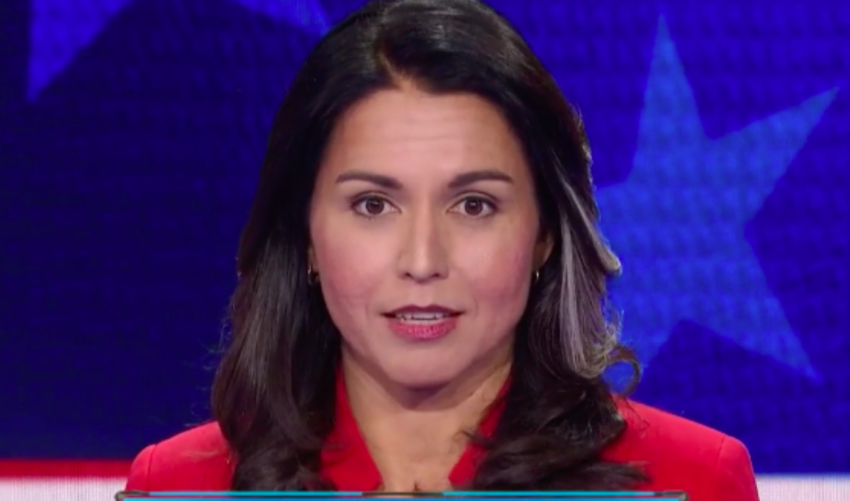 Rep. Tulsi Gabbard took command of the Democratic debate stage on Wednesday evening, ignoring the pointless question they launched at her and taking a strong stand against intervention and regime change wars.

Rep. Gabbard was asked about her beliefs regarding equal pay for women — likely an attempt to avoid her discussing foreign policy. The reason for this is that her bold anti-intervention and anti-regime change stances will be hugely popular with the public, but they are not popular among the establishment on either side.

Undeterred by their random softball question, Rep. Gabbard began by saying that the “American people deserve a president who will put your interests ahead of the rich and powerful,” adding “that’s not what we have right now.”

The 2020 hopeful then began describing her 16 years of military and public service, explaining that she enlisted in the Army National Guard following the terror attacks on September 11, 2001. She still currently serves as a major. Rep. Gabbard wasn’t bragging about her record for cheap applause, she did so to make sure that people understood why she is overly qualified to say what came next.

Our leaders have failed us, taking us into one regime change war after the next, leading us into a new Cold War & arms race, costing us trillions of our hard earned tax payer dollars & countless lives. This insanity must end. #TULSI2020 #DemDebate https://t.co/PIdii6kLxh pic.twitter.com/Gt4gRjFbZP

“I know the importance of our national security, as well as the terribly high cost of war,” Gabbard asserted. “For too long our leaders have failed us, taking us into one regime change war to the next. Leading us into a new Cold War and arms race, costing us trillions of our hard earned taxpayer dollars and countless lives,” Rep. Gabbard argued. “The insanity must end.”

Rep. Gabbard concluded by saying that, as president, she will use taxpayer dollars to serve taxpayer needs at home.

This isn’t the first time that Rep. Gabbard has spoke out about war. It’s a central point of her campaign.

“War with Iran will be far more costly than the Iraq war. It will undermine our national security, and waste countless of lives and trillions of dollars. As president, I’ll restore the Iran nuclear deal and de-escalate tensions,” Gabbard tweeted along with a video last month.

War with Iran will be far more costly than the Iraq war. It will undermine our national security, and waste countless of lives and trillions of dollars. As president, I'll restore the Iran nuclear deal and de-escalate tensions. Join me and say #NoIranWar! pic.twitter.com/nLjXvmn9y7

The video was a clip from Gabbard’s interview on PBS News Hour, where she was asked what she would be doing differently than the Trump administration concerning Iran.

“I think first it’s important to make sure the American people understand that a war with Iran would be far more costly and far more devastating than anything we experienced with Iraq,” Gabbard began. “What we would see is a devastating cost on our troops, my brothers and sisters in uniform, a cost on civilians, people both in Iran and across the region, a worse refugee crisis across Europe, as well as a strengthening of terrorist groups like Isis and al-Qaeda — further undermining our national security.”

Gabbard added that a war with Iran would make the Iraq War “look like a cakewalk.”

When asked if she would have pulled out the Iran Nuclear Deal, Gabbard said that she would not have and that President Donald Trump’s strategy thus far has been counterproductive and a “failure.” She said that if she is elected she would re-enter the deal and negotiate with Iran on other issues separately to find a diplomatic way to ease tensions.