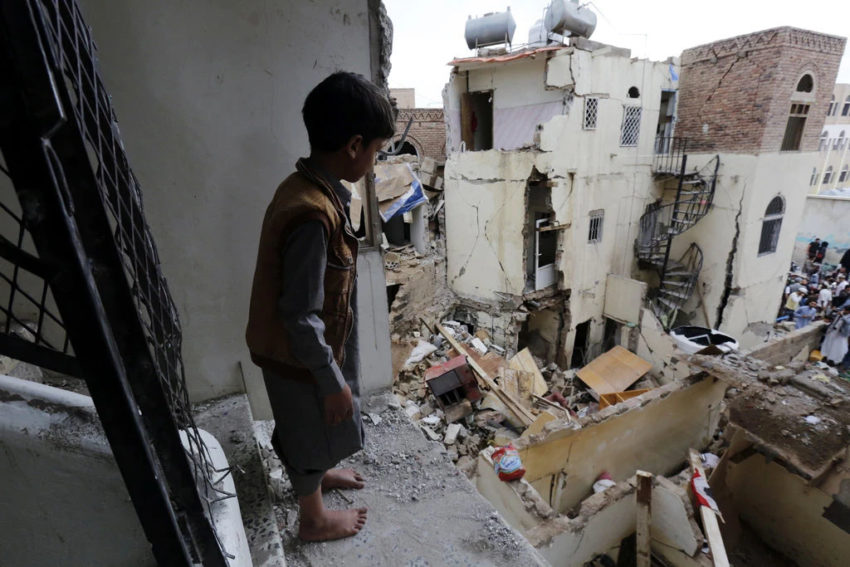 Recent tensions between the United States and Iran have been dominating mainstream media headlines, leaving little or no room for coverage of the war in Yemen, or as the UN calls it “the world’s worst humanitarian crisis.”

Since 2015, the U.S. has been backing its allies, Saudi Arabia and the United Arab Emirates, among others, in a brutal campaign against the Houthis of Yemen. The United Nations has called the conflict a “war on children” in a report they released earlier in the year. The report revealed if the war ends in 2019 it will account for 233,000 deaths, 60 percent of those deaths being children under five. The UN also estimates 13 million people are at risk of starvation in the country, with 80 percent relying on humanitarian aid.

The World Food Programme (WFP), announced last week it had started a partial suspension of aid in the capital Sanaa, citing failure to reach an agreement with the Houthis, who the WFP claim are diverting the food away from those who need it most.

The WFP wants to implement a biometric identification system to keep track of the aid, which would involve iris scanning, fingerprints or facial recognition. The Houthis believe the WFP controlling this biometric data is a violation of Yemen law. The suspension of aid will affect 850,000 people who rely on it in the capital.

Earlier this month, The Armed Conflict Location & Event Data Project(ACLED) released a report, finding over 91,000 fatalities as result of the war. The report does not take into account deaths attributed to malnutrition or preventable diseases such as cholera. The ACLED found nearly 4,500 events that directly targeted civilians, resulting in approximately 11,700 reported civilian fatalities. The Saudi-led coalition was found to be responsible for over 8,000 of the civilian deaths, the Houthis and their allies are responsible for over 1,900.

The Yemen Data Project has compiled an impressive spreadsheet of all Saudi-led coalition airstrikes since March 26th, 2015. One can comb through the over 19,000 airstrikes and see the coalition has hit hospitals, schools, apartment buildings, markets and water treatment plants.

Since President Obama pledged support to the Saudi-led coalition, the conflict went largely underreported and unnoticed by Americans. But then on in August of 2018, a U.S. made bomb struck a school bus in Yemen, killing 40 children, an atrocity so horrible it was impossible to ignore.

Shortly after the school bus bombing, in October of that year, Washington Post journalist and U.S. resident Jamal Khashoggi was brutally murdered inside of the Saudi consulate in Turkey. The tragic murder of Khashoggi gained far more media attention than thousands of dead Yemenis ever did, forcing U.S. politicians to reexamine their relationship with the Kingdom of Saudi Arabia.

In a statement released by President Trump defending his relationship with the kingdom last November, he blamed Iran for the war in Yemen, like many who support the war do. But the Houthis have been fighting against the Saudi backed government since 2004, when they tried to arrest Hussein al-Houthi, the leader of the group at the time. The Houthis fought back against the government, sparking a series of wars between 2004 and 2010. Simply blaming Iran for the war ignores Yemen’s history.

Trump also revealed the real reason for supporting the Saudis in the war, “After my heavily negotiated trip to Saudi Arabia last year, the Kingdom agreed to spend and invest $450 billion in the United States.” Trump then names the real benefactors, “Of the $450 billion, $110 billion will be spent on the purchase of military equipment from Boeing, Lockheed Martin, Raytheon.”

The Trump administration has been trying to blame Iran for the Houthi’s recent attacks on Saudi Arabia, recently targeting an oil pipeline, arms depot and an airport. Even if Iran is arming the Houthis, which there is no definitive proof of, these attacks are clearly blowback from an indiscriminant bombing campaign the Saudi’s have been waging for over four years now.

While we’re discussing blowback, it is important to remember this bombing campaign would not be possible without U.S. intelligence and weapons. In the eyes of the Yemeni civilians the U.S. is waging war on them. Reckless U.S. foreign policy has a way of creating more enemies, most notably the destabilization of Iraq, giving rise to ISIS.

The most infamous enemy of the United States, Osama bin Laden, turned his eye on the U.S. after the Soviet Union was driven out of Afghanistan. As made clear from his 1996 fatwa entitled, “Declaration of War against the Americans Occupying the Land of the Two Holy Places,” bin Laden’s hatred for the Americans grew from U.S. troops being stationed in Saudi Arabia in the run up to Desert Storm, the brutal sanction and bombing campaign against Iraq throughout the 1990s and U.S. support for Israel.

What unintended consequences can we expect from our support for this horrible war on the poorest country in the Arab world? With the president outright admitting he is only in it for the money, the American people cannot claim ignorance on this one.

Trump had a chance to stop his part in the war, having recently vetoed a bipartisan bill to end our support to the Saudi-led coalition, which the senate failed to override. Now it’s time for the American people to step up and demand an end to this unholy war against children.