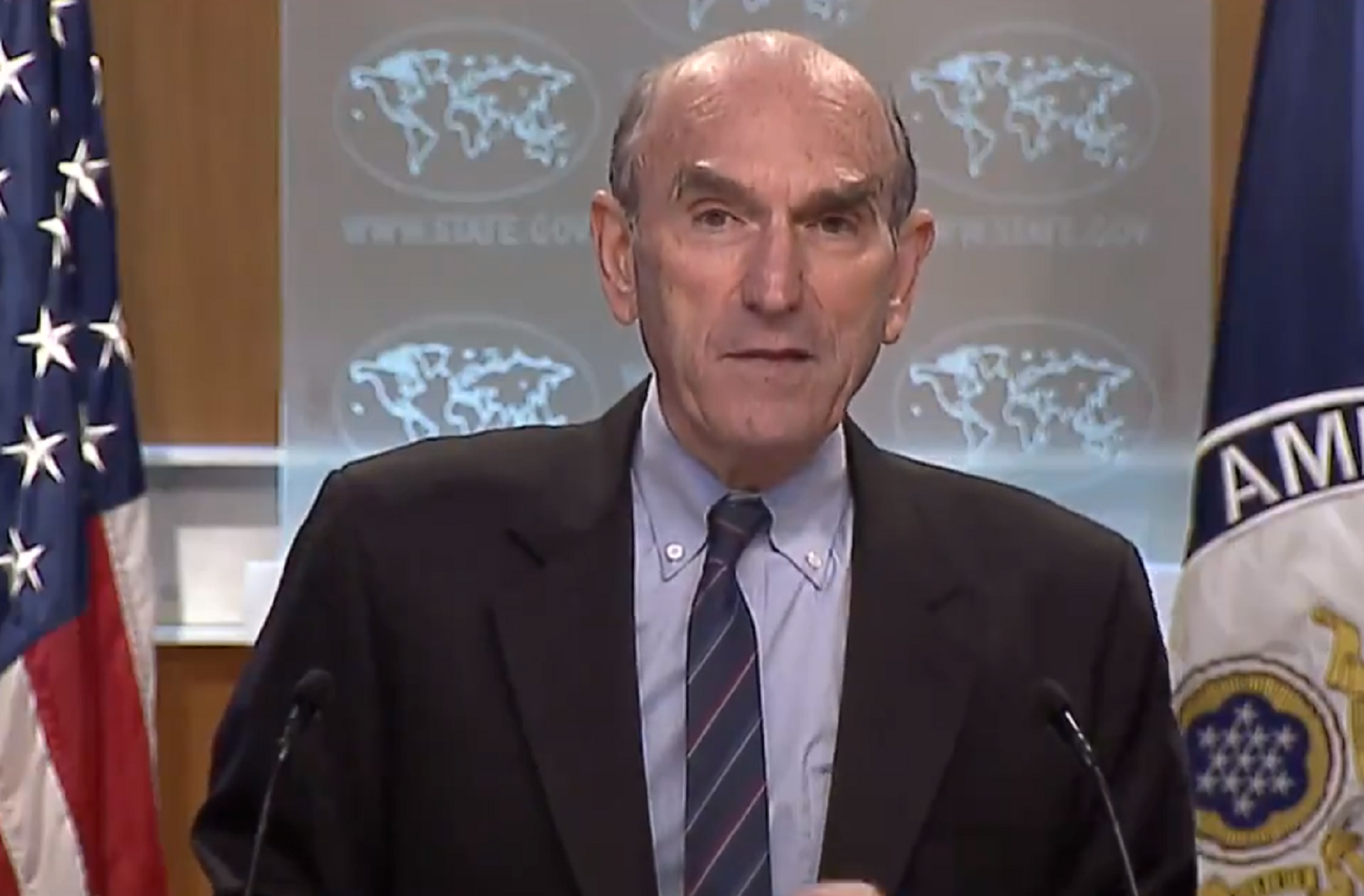 Neocon Elliot Abrams, Trump’s envoy to Venezuela, held a press conference on Tuesday to give updates on his failed coup in Venezuela. It is important to keep in mind that Abrams was convicted of lying to congress over the Iran-Contra affair in 1986 when listening to him speak.

Since opposition leader Juan Guaido declared himself interim president of Venezuela back in January, there have been several failed coup attempts and increased pressure from the U.S. for Maduro to step down. The Venezuelan military has stood by president Maduro in every attempt, with just a few defectors.

Humanitarian aid has been politicized in this conflict, most notably the standoff at the Colombia-Venezuela border in February. USAID was trying to force aid trucks over the border that Maduro did not want, since he has his suspicions of USAID being a CIA front. This was a perfect way for U.S. media outlets to portray Maduro as a monster, but he has accepted aid from his allies, China and Russia.

A Russian military aircraft reportedly landed in Caracas on Monday. Abrams said the plane was carrying, “technicians to service previously sold arms systems.” Abrams then smugly pointed out how the U.S. Navy is sending a hospital ship to the Caribbean to help displaced Venezuelan refugees, while Russia is sending military equipment.

Abrams went on to praise Guaido, “Interim president Juan Guaido continues to travel throughout the country distributing humanitarian assistance, organizing health clinics and spreading an important message that he seeks a peaceful democratic transition.” But there have been recent corruption charges within Guaido’s circle.

A recent scandal involving members of Guaido’s opposition group came out last week. They have been accused of spending funds raised by a concert for humanitarian aid on luxury hotels, clubs, designer clothes and cars. The concert was put on by Virgin CEO and billionaire Richard Branson in Colombia, around the time of the humanitarian aid stunt on the border.

Venezuela’s government has also claimed the U.S. Justice Department will be opening an investigation into an alleged accounting fraud that may have stolen $70 million of Citgo assets, since the opposition has taken over the board of directors.

Venezuela’s vice minister of communications said, “It seems like the person directly involved in having pocketed those $70 million in excesses, due to cooking the books, is Mr. Carlos Vecchio.” Carlos Vecchio is a former Exxon-lawyer and the opposition’s appointed diplomat to Washington.

Of course, Abrams did not mention any of these scandals in his remarks on Tuesday, just continued his Maduro bashing and Guaido praising. He also called the idea of a peaceful democratic transition under Maduro “laughable”. The opposition and Maduro representatives have recently held talks in Norway, although the U.S. said the talks must focus on ousting Maduro, in effect sabotaging any real progress.

Regardless of Maduro’s corruption, this U.S. intervention is doing nothing but making the Venezuelan economy scream even more. The collapse of Venezuela’s economy can be blamed on oil prices, rampant inflation, price control, socialism, U.S. sanctions or a combination of these things. But the U.S. and its allies seizing any Venezuelan assets they have control of is nothing short of criminal and it needs to stop.

The next time Eliot Abrams walks up to the podium, remember he was convicted of lying to congress over Iran-Contra. Also remember how he downplayed the El Mozote Massacre in El Salvador in 1981, where 800 civilians were massacred by a U.S. backed military unit. Abrams told the Senate the reports of the massacre were “not credible” after it happened. As recently as 2001 Abrams said U.S. policy in El Salvador at the time was a “fabulous achievement.” So, when Abrams says Guaido is “distributing humanitarian assistance,” it should be taken with a grain of salt.