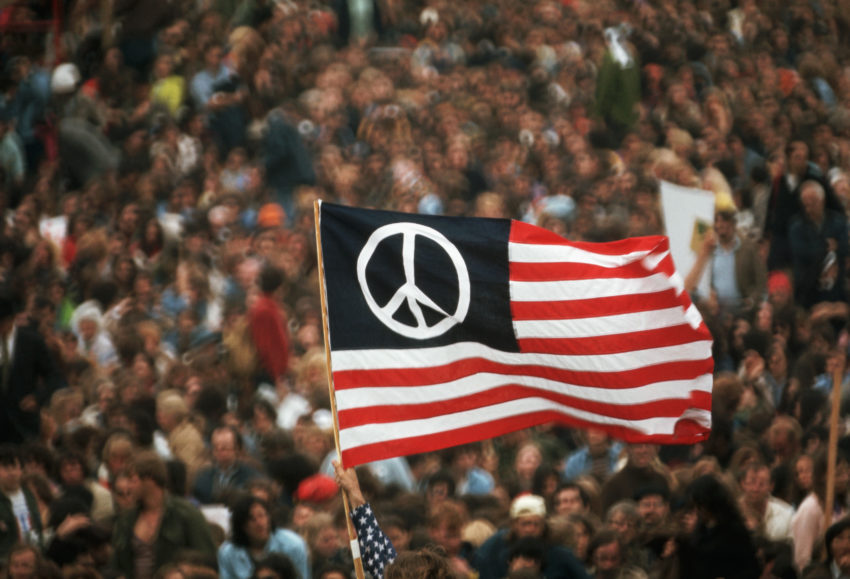 Iran has announced this week they will be enriching Uranium to 5%, which is over the 3.67% cap agreed to in the Joint Comprehensive Plan of Action (JCPOA) signed under the Obama administration in 2015.

Most mainstream news outlets are running headlines like, “Iran Announces Further Uranium Enrichment in Breach of Deal,” but the fact is the Iranian’s are breaching nothing. The U.S. withdrew from the deal over a year ago, last May, and begin imposing sanctions back on the Islamic Republic.

U.S. sanctions have a devastating impact on the Iranian economy. Oil exports have fallen to about 300,000 barrels per day, compared with the 2.5 million barrels Iran was selling in April 2018.

British Royal Marines seized an Iranian oil tanker off the coast of Gibraltar on Thursday. The tanker was suspected of delivering oil to Syria, which would be a violation of U.S. and EU sanctions. Sanctions have caused dire fuel shortages in Syria, forcing the Assad government to ration fuel and ordinary Syrians struggled to heat their homes last winter.

Both the Spanish foreign minister and Iranian officials accused the U.S. of ordering the seizure of the ship. No U.S. officials have admitted to giving the order, but National Security Advisor John Bolton celebrated the seizure in a tweet on Thursday, “Excellent news: UK has detained the supertanker Grace I laden with Iranian oil bound for Syria in violation of EU sanctions. America & our allies will continue to prevent regimes in Tehran & Damascus from profiting off this illicit trade.”

Trump followed his instinct a few weeks ago when he decided to call off an airstrike against Iran that his generals estimated would have killed 150 Iranians. Trump rightly thought the deaths would have not been a proportionate response to Iran shooting down an unmanned drone, which they said violated Iranian airspace. According to a Harvard CAPS/Harris Poll online survey of 2,182 registered voters, 78% agreed that Trump made the right decision to not bomb Iran.

If Trump truly cared about Iranian lives, he would lift sanctions, go back to the deal and tone down the rhetoric against the Islamic Republic. The president has created a powder keg in the Persian Gulf and any moment now it can explode.

After President Trump’s unexpected meeting with North Korea Chairman Kim Jong Un in the Demilitarized Zone between the two Koreas, the New York Times reported the administration was considering a deal to negotiate a nuclear freeze, not total denuclearization. The report seemed to upset John Bolton who tweeted on Monday, “I read this NYT story with curiosity. Neither the NSC staff nor I have discussed or heard of any desire to ‘settle for a nuclear freeze by NK.’ This was a reprehensible attempt by someone to box in the President. There should be consequences.”

Steve Biegun, Trump’s North Korea negotiator did tell reporters when he returned from North Korea, “What we are looking for is a complete freeze of WMD programs.” The negotiator went on, “freeze and an idea of an end state, and then within that we have a discussion of a roadmap.” Biegun’s comments were not made public until a few days after the New York Times story and did show there was truth to the story, despite Bolton’s claims. This is a good sign that Bolton, who is notoriously hawkish on North Korea, may not be involved in these new rounds of negotiations.

On Wednesday, North Korea’s UN mission released a statement accusing the Trump administration of trying to undermine the peace process. The statement cited a letter from the U.S., Britain, France and Germany to UN member states calling for all North Korean workers abroad to be sent home, to comply with UN sanctions based on a breached cap on refined petroleum imports. The letter came just a day before Trump and Kim met.

The UN mission statement also mentioned U.S. sanctions, “It is quite ridiculous for the United States to continue to behave obsessed with sanctions and pressure campaign against the DPRK, considering sanctions as a panacea for all problems.” North Korea could be trying to set a precedent for negotiations, showing that they won’t settle for anything less than sanction relief.

Regardless of the statement from North Korea, Trump meeting with Kim and the U.S.’s negotiator showing flexibility with a possible nuclear freeze are good signs. Pompeo said fresh rounds of talks between the two nations will start “sometime in July.”

A migrant detention center in Libya’s capital city Tripoli was hit by an airstrike on Tuesday, killing at least 53 civilians. The UN backed unity government in Tripoli blamed the attack on rebel leader and former general Khalifa Hafter. The rebel leader denied responsibility, although he did admit to striking a military target nearby.

Hafter, a U.S. citizen and former CIA asset, has been leading a months-long campaign against the UN backed unity government in Tripoli. The UN security council condemned the airstrike on Friday and called for a ceasefire between the warring parties.

The airstrike comes after U.S. made weapons were found in a base used by Hafter. The markings on the weapons indicated they were sold to the United Arab Emirates in 2008. Senator Bob Menendez (D-NJ) penned a litter to Pompeo demanding an investigation into the weapons.

Back in April, Trump called Hafter to praise him for his success in securing oil fields and fighting terrorists. The phone call came after Hafter started his offensive on Tripoli against the government the U.S. is supposedly backing.

In 1987, Hafter was captured in neighboring Chad while on a mission for Moammar Gadhafi. He gained his freedom by joining CIA backed anti-Gadhafi efforts. These efforts did not last long and after a Gadhaffi-backed coup in Chad, Hafter was forced to leave. The former general fled to the U.S., where he was granted citizenship and took up residence in Northern Virginia, just a short 20-minute drive to CIA headquarters. Hafter returned to Libya after the 2011 Libyan civil war.

Hafter’s history of cooperation with the CIA, his 20-plus years living in the U.S. and recent phone call with Trump make the recent discovery of U.S. made weapons in his possession all the more suspicious. After he spoke with Trump, Hafter hired a lobbying firm in Washington to help with “international coalition building.” The U.S. may be officially backing the unity government in Libya, but Hafter seems like he may be the man the Trump administration would like to see in power in Tripoli.

U.S. and Taliban officials have been holding peace talks in Qatar. “Eighty-Ninety percent work on the peace agreement is finished,” Taliban political spokesman Suhail Shaheen told Al Jazeera, “Spectacular progress made in this round.”

Despite the progress, fighting is still raging on in Afghanistan, the Taliban have made it clear they will keep fighting the U.S. backed government until all foreign troops are withdrawn. This has been a particularly violent week, at least 246 pro-government forces and 58 civilians were killed in Afghanistan from June 28th to July 4th, the highest death toll so far of 2019.

“I’ve wanted to pull them out. And you know, I have pulled a lot out. We were at 16,000. We’re down to about 9,000, which a lot of people don’t know,” Trump told Tucker Carlson in an interview Monday night. Although a senior military official contradicted the president and said 14,000 troops still remain, it shows Trump’s willingness to get out.

Trump also said he would keep a “strong intelligence” presence in the country, something the Taliban may not find acceptable.

The Houthis have continued drone attacks inside of Saudi Arabia, repeatedly attacking military targets at Jizan airport and Abha airport in the south. The Saudi’s, with help from the U.S., have been waging a brutal bombing campaign on Yemen since 2015. They have launched over 19,000 airstrikes on the country, targeting civilian infrastructure and enforcing a blockade on the country so aid cannot get in. The situation in Yemen is dire, a UN report released this year said if the conflict ends in 2019 it will account for 233,000 deaths, 140,000 of those deaths being children under five.

Most media outlets refer to the Houthis as Iran-backed rebels, but they have had control over a large part of Yemen for a few years now, serving as a government. Defining the Houthis as an Iranian proxy ignores the country’s history, and journalists repeating it as fact does nothing but push us closer to war with Iran. It allows Trump’s hawks and Iran’s nemesis, Saudi Arabia, to frame the Houthi’s defensive drone attacks as “Iranian aggression.”

The Houthis started as a Zaydi Shia movement in the 1990s, Zaydi Shia Imam’s ruled over the north of Yemen for over 1000 years until 1962 when North Yemen became the Yemen Arab Republic. North and South Yemen united in 1990 and the Zaydi of the north did not feel that the government represented them.

The Houthis fought a series of brutal wars against the government of Yemen from 2004-2010. A Wikileaks cable from the former US Ambassador to Yemen to the U.S. State Department in 2009 said, “Contrary to ROYG(Republic of Yemen Government) claims that Iran is arming the Houthis, most local political analysts report that the Houthis obtain their weapons from the Yemeni black market and even from the ROYG military itself.”

Although this cable is from 2009, it shows the Houthis are a homegrown rebellion, not some creation of Iranian influence.

The United Arab Emirates are reducing their military presence in Yemen, citing tensions in the Persian Gulf with Iran. They are also pushing to increase the size of UAE-loyal militias in the country, so as to not lose influence.

It’s been six months since opposition leader Juan Guaido declared himself president of Venezuela, with the blessing of the Trump administration. President Nicolas Maduro still remains in power after a few failed attempts to turn the military against him.

Speaking in Caracas on Friday, Venezuela’s Independence Day, Maduro called for dialogue with his opposition and said, “There is room for all of us within Venezuela… We must all give up something in order to reach an agreement.”

Guaido told reporters on Friday, “There is no longer any valid euphemism to characterize this regime, other than dictatorship,” making it clear he still seeks regime change.

The Trump administration has continued its policy of aggression towards the Maduro regime. U.S. sanctions are still in effect in Venezuela, which the Center for Economic and Policy Research had determined were responsible for the deaths of 40,000 Venezuelans in a report they released in April.

The 1987 treaty forbids both the U.S. and Russia from making medium-range land-based cruise and ballistic nuclear-capable missiles. The U.S. accused Russia of violating the deal with a recently developed missile, but Russia denied the accusation and said the missile was only tested for ranges shorter than the INF restriction.

The withdrawal from the deal raises concerns by Russia, that the U.S. plans on putting medium-range missiles in Eastern Europe, close to the Russian border. The Trump administration has increased NATO-troop presence in the area, another example of Trump’s anti-Russia foreign policy that in itself should prove he is not taking orders from Putin, despite what his democratic critics say.