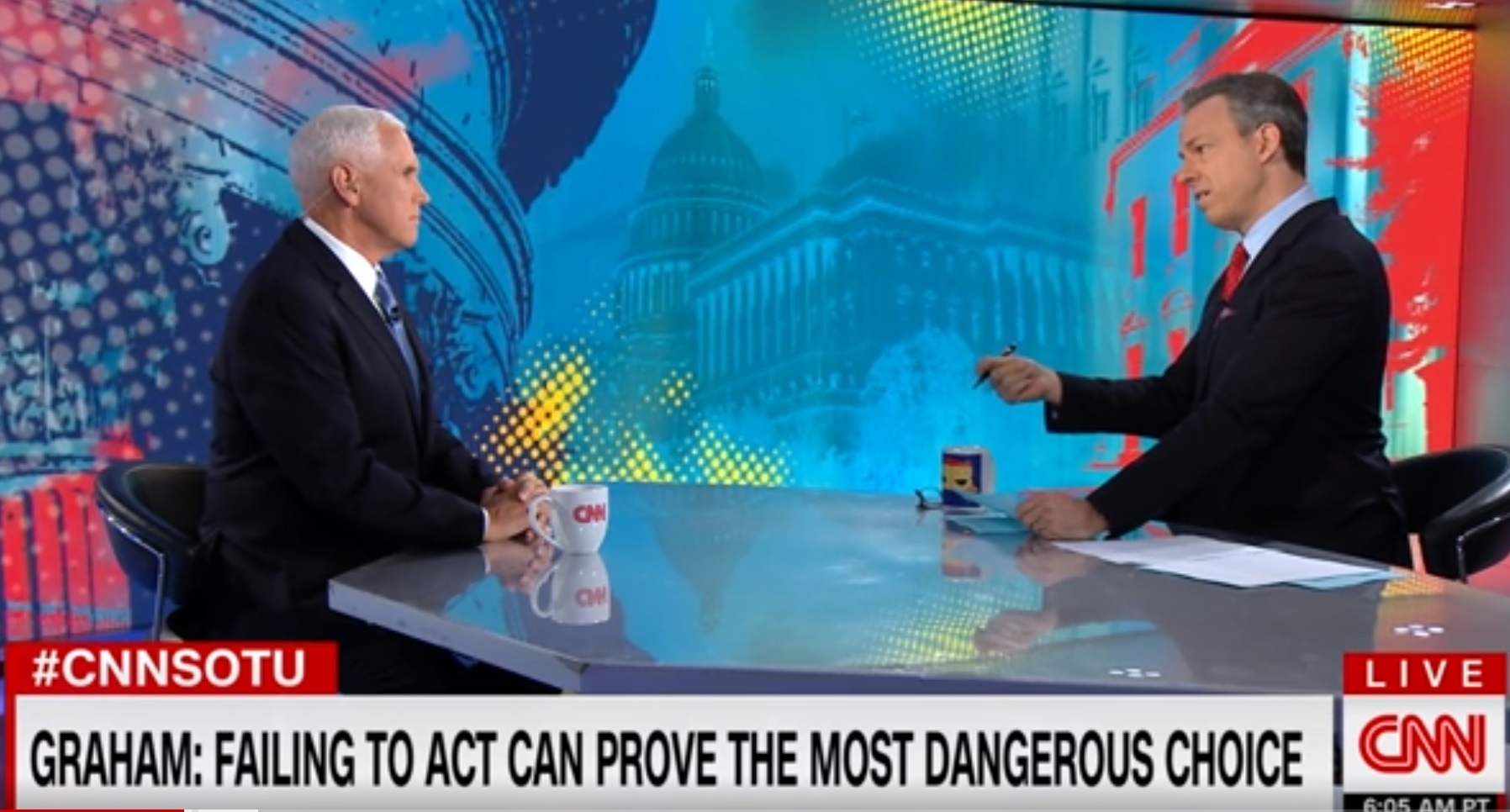 CNN’s Jake Tapper grilled Vice President Mike Pence on whether or not it was “dangerous” for the administration to choose not to bomb Iran over an unmanned drone.

The bizarre exchange took place during CNN’s State of the Union on Sunday morning.

Approximately three minutes into the discussion Tapper began to push Pence on the claims from Sen. Lindsey Graham that failing to act would be “the most dangerous choice of all.”

“Do you agree that there is a risk that Iran will get the wrong message from the president’s restraint?” Tapper asked.

Pence began to explain that our military is strong and he has faith in Trump’s decision, which prompted Tapper to interject and ask Pence if Trump is “willing to pull the trigger.”

“Do you think the president isn’t willing to pull the trigger,” Tapper asked while miming pulling one himself. “Is that a concern at all?”

Pence explained that Trump was encouraged by the fact that Iran was also tracking a manned US military aircraft and did not fire upon it, even though the Iranian government believed it was in their air space. He said that this gave the administration confidence that the nation understands the military capabilities of America.

Tapper seemed frustrated and almost upset that 150 lives were not taken over a flying robot.

Comedian Lee Camp responded to the interview by saying that “CNN hack Jake Tapper literally presses Vice President Mike Pence on whether it was dangerous to NOT bomb Iran!”

“Yes, we are at a point where Donald Freakin’ Trump is less blood thirsty than your average CNN anchor,” Camp added.

In this clip CNN hack @jaketapper literally presses Vice President Mike Pence on whether it was dangerous to NOT bomb Iran!

Yes, we are at a point where Donald Freakin' Trump is less blood thirsty than your average CNN anchor. https://t.co/DiN9WI30k2

Tapper also questioned President Donald Trump’s assertion that he was not presented with a total number of estimated casualties until late into the planning.

“What I can tell you without talking about the details of those deliberations is that the president was provided with casualty assessments and a whole range of information relative to the military strikes,” Pence responded. “But as the president indicated, late in the process there were more specific projections given to him, relative to the targets that he was prepared to use force against and he concluded that it was not a proportionate response to shooting down an unmanned American aircraft.”

On Iran shooting down a US military drone, “we’re not convinced that it was authorized at the highest levels,” Vice President Mike Pence says to CNN’s @JakeTapper. https://t.co/1HsRVzyibx #CNNSOTU pic.twitter.com/Tt6dOuS3ie

Pence noted the fact that the administration was not convinced that the attack was authorized at the highest levels.

“He put regard for human life first,” the Vice President said.

Let’s Not Forget About Yemen