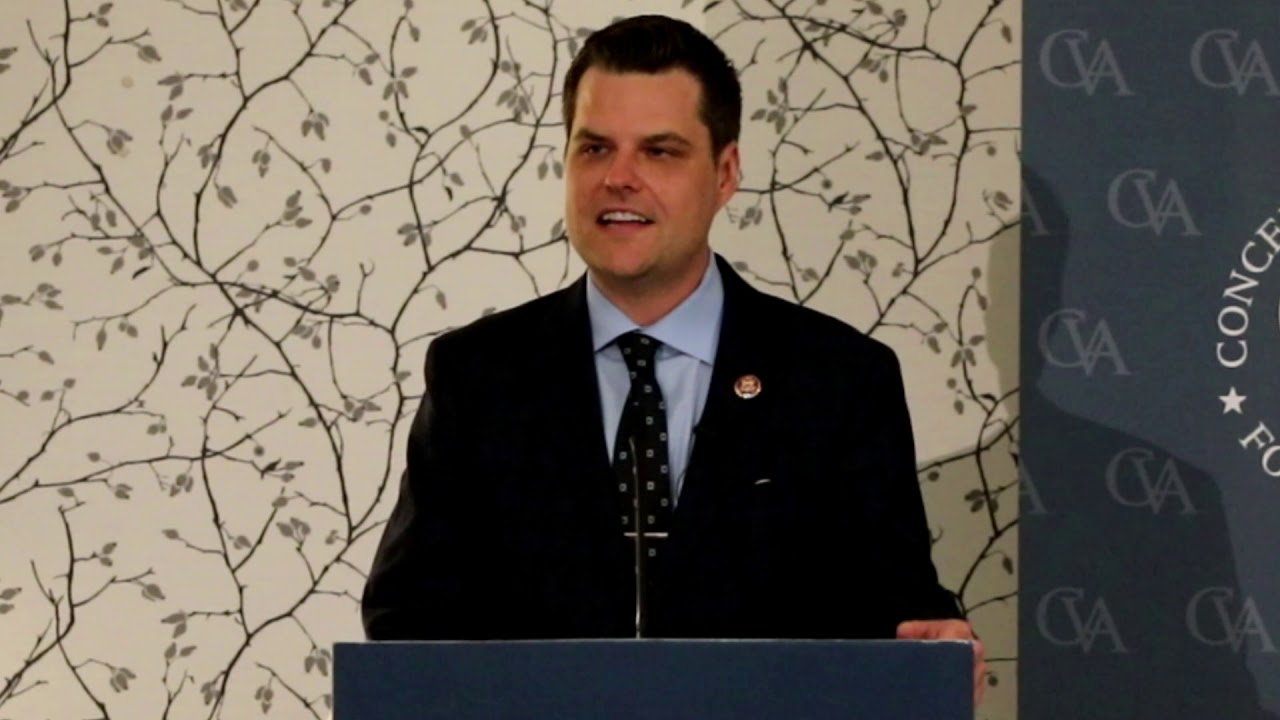 Rep. Matt Gaetz (R-FL) delivered a major foreign policy speech on Wednesday, in which he declared that “real morality is affirming forever that the blood of American troops is not for sale to anyone, at any cost.”

Rep. Gaetz is a member of the House Armed Services Committee and a close ally of President Trump.

Speaking at Concerned Veterans for America’s Uniting for a Better Foreign Policy Luncheon, Gaetz laid out his idea of an “America First Doctrine” in which we maintain a strong military edge, but make sure that the interests of our own citizens come before those of special interest groups or other nations.

Best line of @RepMattGaetz Epic Foreign Policy Speech: “Real morality and real toughness is standing up to the pro-war special interests and globalist powerbrokers. Real morality is affirming forever that the blood of American troops is not for sale to anyone, at any cost.” pic.twitter.com/IHscY3wdYD

“Real morality and real toughness is standing up to the pro-war special interests and globalist powerbrokers. Real morality is affirming forever that the blood of American troops is not for sale to anyone, at any cost,” Rep. Gaetz asserted.

Rep. Gaetz explained that “the fog of war is no fog to me, or to any of the 700,000 people I serve,” explaining that continued deployment of American troops leaves “parenting disrupted, marriages destroyed … caskets draped in flags.”

The Congressman added that the money spent in Afghanistan and Iraq would have been enough to completely overhaul and modernize our own infrastructure.

“We have been in Afghanistan for two decades,” Gaetz said. “American soldiers are dying there who weren’t born when the war started.”

Amid the escalating tensions with both Iran and Venezuela being pushed by every hawkish DC elite, Rep. Gaetz warned that we should not be putting our troops into endless conflicts.

“The so-called experts behind our failed foreign policy have not learned from their mistakes because they have never been held accountable for them. And so today the saber-rattling persists, and is directed toward Venezuela, Yemen, and most disturbingly, Iran,” said Gaetz. “As we look to these countries, it is our task to ensure that we don’t just recount the mistakes of past decision-makers, but that we learn from them. We must resolve not to start unwise wars or put our military in unwinnable and endless conflicts.”

Rep. Gaetz’s speech echoed the sentiments heard at a bipartisan press conference that was also held on Wednesday, urging against war with Iran and calling for the 2001 Authorization for Use of Military Force (AUMF) to be repealed. Speakers included Republican Rep. Thomas Massie and Democratic Rep. Barbara Lee.

During Rep. Massie’s speech, he explained that the best way for President Trump to avoid going to war with Iran is simply not to do it.

“It doesn’t matter whether your favorite Founding Father was Hamilton, Madison, Jefferson or Washington — they all recognized the wisdom in leaving the power to declare war in the Legislative Branch and the danger of letting the Executive Branch have that power,” Rep. Massie said. “The president said he doesn’t want war with Iran and I believe him. But, the easiest way not to have war with Iran is not to start a war with Iran.”

This morning, I joined my colleagues in front of the U.S. Capitol building to encourage the repeal of the 2001 Authorization for Use of Military Force (AUMF). The AUMF has been used to justify many unconstitutional military engagements. The Constitution grants the Legislative Branch the power to declare war—not the Executive. Great countries do not fight endless wars.Many thanks to Congresswoman Barbara Lee for leading on this issue.

Posted by Congressman Thomas Massie on Wednesday, May 22, 2019

The Pentagon will be presenting the White House with plans to send up to 10,000 more troops to the Middle East on Thursday.

The Pentagon Wants to Deploy 10,000 More Troops to the Middle East