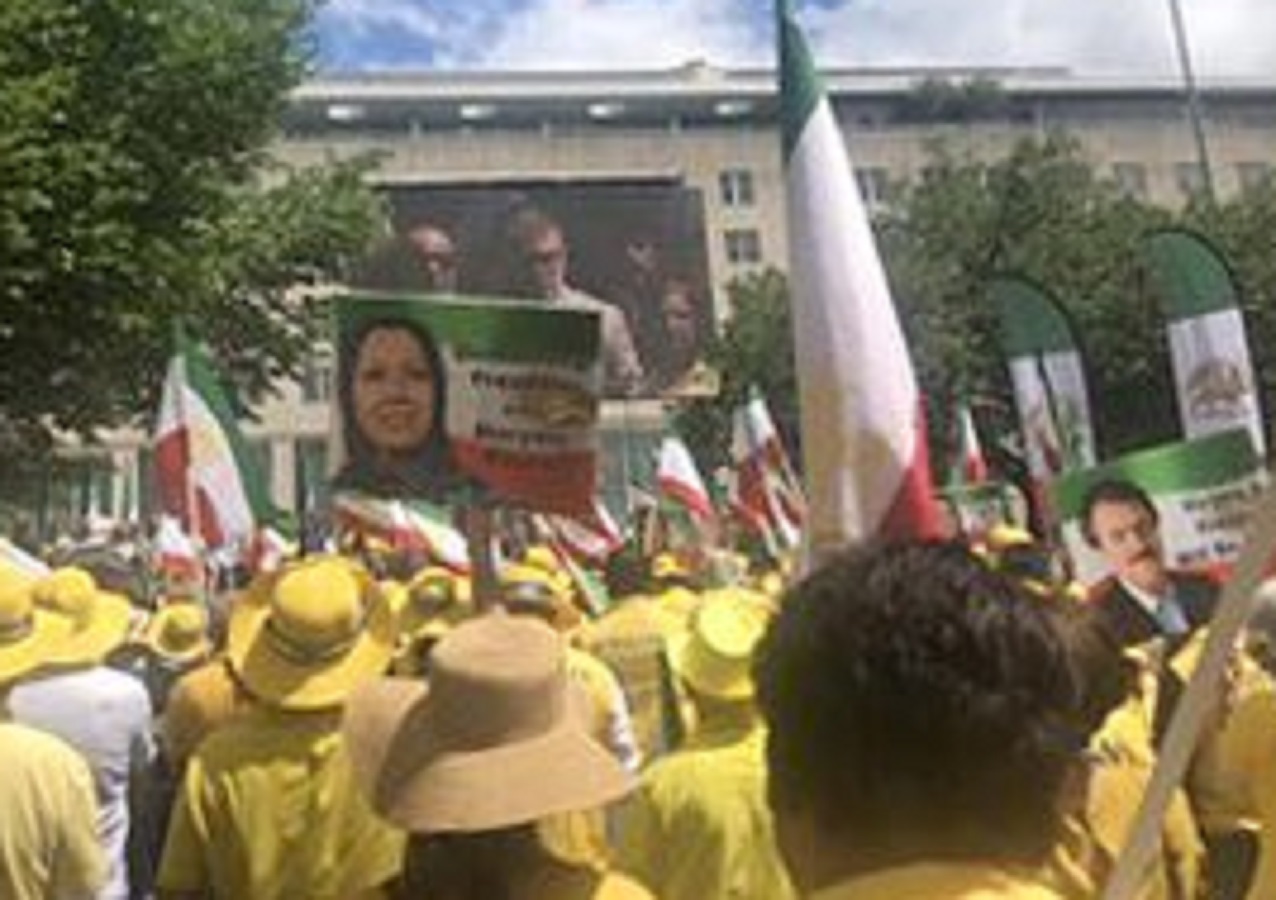 Supporters of the controversial group of Iranian exiles, Mujahedeen-e-Khalq(MEK) rallied in Washington DC on Friday calling for regime change in Tehran. The MEK have close ties with President Trump’s National Security Advisor John Bolton and the president’s personal lawyer, Rudy Giuliani. The MEK was once designated as a terrorist group, having been taken off the list in 2012.

Several U.S. politicians spoke at the event, dubbed the “Free Iran rally”. Former democratic congressman Robert Torricelli, who served in the House and Senate for New Jersey, spoke at the event and clamored for regime change, “The reality is the mullahs will never change, they will develop nuclear weapons, they will spread terror. We need regime change and we need it now!”

Two representatives from the State of California also spoke, democrat Brad Sherman and republican Tom McClintock, both showing their support for the MEK and regime change. Retired four-star general Jack Keane sounded especially hawkish when it was his turn at the podium, almost bragging about the effects U.S. sanctions have had on Iran’s economy, “there are food shortages and power outages, and there is growing civil unrest. And the Iranian people are correctly blaming Iran, not the United States.”

Former New Mexico government and ambassador to the UN, Bill Richardson spoke highly of the MEK, “It’s a strong organization, with a lot of confidence and commitment and leadership abilities. The top leader, Mrs. Maryam Rajavi, is a great leader.”

Senators Bob Menendez and John Cornyn sent written messages to be read at the rally, both supporting the MEK and calling for regime change.

Journalist Max Blumenthal attended the rally on Friday in hopes of talking to the rally attendees, all wearing matching yellow vests with the slogan “Free Iran.” But in a video Blumenthal posted on twitter it appeared that somebody was stopping him from asking questions, he tweeted, “This guy was part of the team tasked with preventing me from interviewing any of the Iranian emigres bussed in to cheer for regime change.”

Throughout the 1970s, the MEK acted as a violent opposition force against the U.S. installed Shah. They killed scores of the Shah’s police, and helped pave the way for the exiled Ayatollah Ruhollah Khomeini’s return to Iran. Khomeini quickly deemed the MEK a threat to his plan to turn Iran into an Islamic Republic. After the revolution, Khomeini’s forces clashed with the group, the MEK successfully killed 70 senior leaders of the Islamic Republic in a bombing.

Khomeini then began a violent crackdown on the MEK and any sympathizers. The remaining MEK members fled to Iraq. In 1986 Saddam Hussein offered the group weapons and cash to carry out terrorist attacks inside of Iran. The MEK lived in the military base at camp Ashraf that Hussein provided for them.

Since the MEK were on Hussein’s side in the bloody eight-yearwar between Iran and Iraq that killed millions, they lost any support they may have had left inside the Islamic Republic. Under their leader Massoud Rajavi, the group became cult-like. A report commissioned by the U.S. government inside of camp Ashraf said, “many of the typical characteristics of a cult, such as authoritarian control, confiscation of assets, sexual control (including mandatory divorce and celibacy), emotional isolation, forced labour, sleep deprivation, physical abuse and limited exit options.”

After the invasion of Iraq in 2003, Rajavi disappeared, his whereabouts is still unknown although many assume he is dead. His wife, Maryam Rajavi, assumed the role as the new leader of the group. After a lavish lobbying campaign, the MEK was removed from the U.S. terror list by the Obama administration in 2012.

The MEK are now based in Albania. Giuliani, Bolton and the late John McCain have all traveled to Albania to show support for the group.

At the 2018 “Free Iran” conference in Paris put on by the MEK, Giuliani said “The mullahs must go. The ayatollah must go. And they must be replaced by a democratic government which Madam Rajavi represents.”

Giuliani also brought up protests that were happening in Iran at the time, “These protests are not happening by accident,” he said. “They’re being coordinated by many of our people in Albania.”

There is a long list of U.S. officials and politicians from both parties who have been paid handsomely to speak at MEK events, including Giuliani, John McCain, Newt Gingrich and former Democratic party chairs Edward Rendell and Howard Dean – along with multiple former heads of the FBI and CIA.

Congresswoman Nancy Pelosi sent a video message expressing her support for the MEK to the “Free Iran” rally in Paris last year. John Bolton has reportedly received $180,000 from speaking at multiple MEK events. In 2017, he was paid $40,000 for his speech at the Free Iran rally in Paris.

This rally displays the amount of support the MEK has from Washington, despite having a history of violence and strange cult-like behavior. The MEK seem to be the group that Washington has chosen to be the new regime in Tehran, whether the Iranian people like it or not.

Let’s Not Forget About Yemen