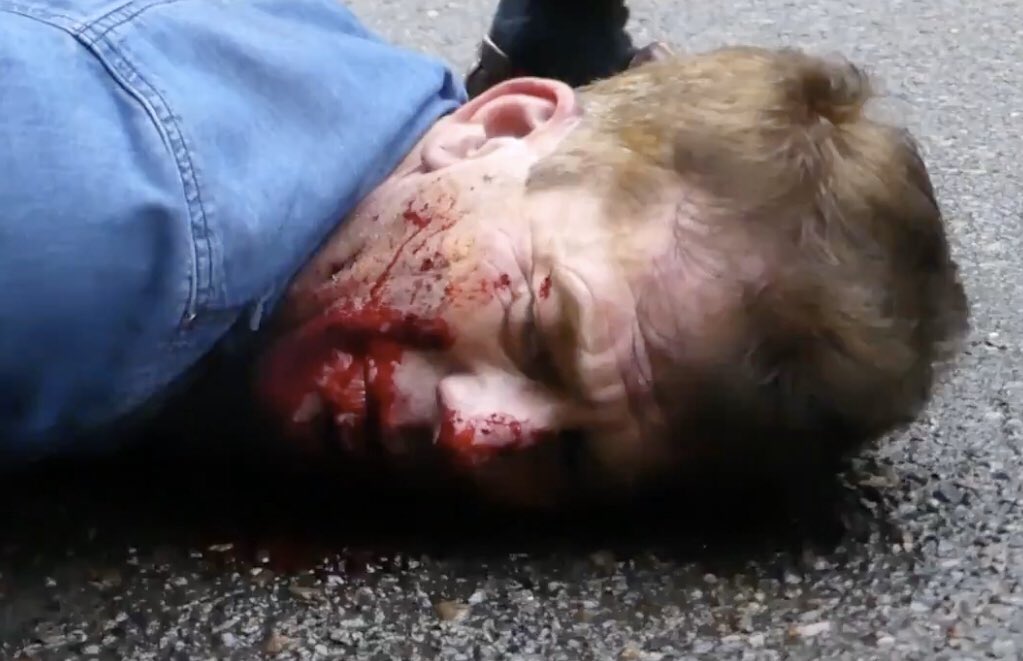 The rioters in Portland savagely attacked a man for having an American flag, then brutalized a man who had tried to help him.

The man with a flag was confronted by the rioters who sucker punched him and attempted to steal it. He refused to let go of it, even as the violent mob pounced on him.

As the mob attacked the lone man, others on the outside threw projectiles at him.

Portland: A man brought an American flag to the antifa/BLM protest (later riot). He is confronted & then sucker-punched by a man wearing a "F— Trump" shirt. The mob rushed in to beat him. He never let go of the flag. @PortlandPolice did not help. #Antifa #BlackLivesMatter pic.twitter.com/OAP6L0THeE

One man attempted to stop the horrific violence and was chased and beat down for it. The violent criminals attacked him from behind and he landed face first on the pavement.

As he laid in the street unresponsive, one of the men kicked him in the head as hard as they possibly could. The man’s face was left a bloody and mangled mess. Large fragments of his teeth were mixed with his blood on the pavement.

Portland: A man tried to help the man carrying a US flag who was getting beaten on the ground at yesterday’s antifa/BLM riot. They chased him away and kicked him in the face when he was unconscious on the ground: #Antifa #BlackLivesMatter pic.twitter.com/xqKTYT5tPl

“Knocked his motherf-cking ass out,” a callous female rioter is heard saying as the man lay unconscious. One can’t help but wonder how someone was raised that would make them so apathetic to violence.

Another rioter can be heard yelling “black lives matter you f-ggot.”

Volunteer “medics for protesters came over, and patronizingly helped him. They lectured him about how it was his fault that he was attacked from behind, because he shouldn’t have went against the mob that was attacking the other man.

“You’re lucky they’re even helping you. Who the f-ck are you running your mouth like that?” another rioter asks.

“Do not, do not protest against black lives because guess what, we’re showing up for you even though you’re being terrible to people,” one of the volunteer “medics” said as the other wiped some blood off his face.

The rioters had defied Mayor Ted Wheeler’s 8 p.m. curfew and rioted for the second night in a row.

On Friday, the rioters looted so many shops and businesses that damages are “in the millions.”

“On Friday night, protesters broke the windows at the downtown Portland Apple store to steal a desktop computer that they then used to break the window of another store. Numerous retailers reported building and looting damages in the millions,” Oregon Live reported.

Police fired tear gas and flash bang grenades both nights in an attempt to stop the violence.

It is unclear if any arrests were made in the mob assaults on the two men.

Riots and mayhem have been ongoing in cities across the United States for days over the death of black man in Minneapolis Police custody on Monday.

On Saturday, a man in South Carolina was chased and attacked by a mob for wearing a ‘Make America Great Again’ hat.

A man in Dallas was stoned and attacked until his mangled body was unresponsive after he attempted to protect his neighborhood from looters.

In Salt Lake City, a gang of rioters jumped an elderly man who had attempted to protect his vehicle and himself. They followed up by flipping his car and lighting it on fire.

Dallas Riot Mob Victim Charles Shoultz: I Was ‘Trying to Protect a Bar I Love’