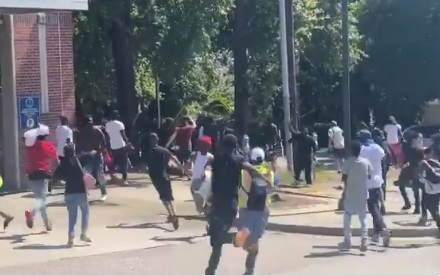 A man was chased down and brutally attacked by a mob of rioters for wearing a red ‘Make America Great Again’ hat and three people are in custody for shooting at a police officer in Columbia, South Carolina.

Richland County Sheriff’s Department has detained three suspects that are believed to be involved in shooting at one of their officers. The officer was not hit and did not fire back.

Like many other cities across the country, lawless and violent riots have taken over as local officials are not allowing police to do their jobs.

During the day on Saturday, local reporter Miranda Parnell tweeted “someone just showed up in a red hat,” along with a video of the mob assault.

Someone just showed up in a red hat @wis10 pic.twitter.com/YTMs2YHFqi

Someone in the footage could be heard saying “oh they beating his ass.”

The condition of the man is not known, as the reporter did not continue filming as the assault continued around the corner. We will update this story if more information becomes available.

Parnell herself was injured while covering the riot after being hit in the head with a rock. In a video posted to Twitter she had blood dripping down the side of her face.

She posted a photo from the emergency room saying that she was “all good.”

All good! Thanks for the love! Giving you guys an update on the protest today in just a few minutes on @wis10. Then I’m going home lol. pic.twitter.com/BcRevptS7k

Rocks were also thrown at police and their vehicles were vandalized and set on fire.

Fires out. Crowd has dispersed from this area. Charred Columbia police cruisers being hosed down and towed away @wis10 https://t.co/TEbh9lxWyG pic.twitter.com/iRuwVZzkxz

They also took the flag down from the police department and lit it on fire while dancing around it.

Some protestors took down the flag in front of CPD and burned it on a Mellow Mushroom pizza box @wis10 #GeorgeFloyd pic.twitter.com/uj4Qzh6jVu

Mayor Steve Benjamin has enacted a curfew in the downtown area that is in place until Monday, June 1, at 6 a.m.  He has said that police will be “assertive and aggressive” in enforcing the curfew and violators will be arrested.

The nation has been terrorized by violent riots that began over the death of a black man in Minneapolis Police custody on Monday. There has been murders, kidnappings, looting, violence, and hundreds of businesses devastated.

UPDATE: Man Stoned and Beat By Mob During Dallas Riot in Stable Condition