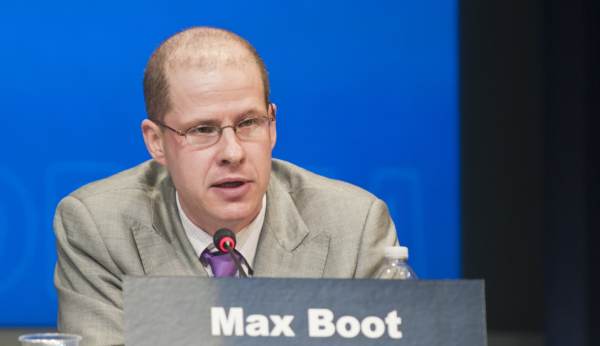 Neocon Never-Trumper Max Boot had an opinion piece published in Sunday’s edition of the Washington Post attempting to goad Donald Trump into going to war with Iran — a move that would completely contradict the president’s ‘America First’ policy platform and alienate a significant portion of his base.

The war fanatic wrote that President Donald Trump needs to “put up or shut up” when it comes to Iran.

“This is part of a pattern with Trump, who roars like a tiger but usually acts like a scaredy-cat,” the has-been wrote. “This is the same president, after all, who has repeatedly threatened to close the border with Mexico or slap it with prohibitive tariffs unless it ended illegal immigration — and never once made good on his threats.”

The warmongering didn’t stop with Iran, the self-important writer also dropped some good old fashioned McCarthyism into the mix.

“What has been on display is not prudence and discretion but indecision and chaos. The message that will go out to enemy capitals is, in fact, that the president is weak. Russian state TV is already mocking Trump for his stand-down with Iran,” Boot continued.

Boot, knowing that Neocon nonsense is no longer popular even among many of the most hawkish Republicans, claimed that he doesn’t want to go to war — he simply wants Trump to make good on his threats. Or something.

“Trump needs to either put up or shut up. But he won’t do either. He continues to run his mouth — or, more accurately, his Twitter account — without making good on his threats. This is the worst of all worlds,” Boot wrote.

It is important to note that Boot was a member of the Project for the New American Century (PNAC), a group founded by another Never-Trump loser, Bill Kristol. The organization has been widely credited as being architects of the Iraq War.

Prior to the fateful terror attacks of September 11, PNAC had laid out a manifesto dreaming up wars all across the Middle East. Their plans had seemingly no regard for human lives, including those of our troops. They laid out plots for regime change in endless places including Lebanon, Egypt, Pakistan, Saudi Arabia, Iraq and of course, Iran. The group was so intense that they even advocated biological warfare, writing on page sixty of their “Rebuilding America’s Defenses” policy platform that “advanced forms of biological warfare that can target specific genotypes may transform biological warfare from the realm of terror to a politically useful tool.”

During the George W. Bush administration, Bolton was made the Undersecretary for Arms Control, which regrettably put him in the position of the go-to guy for anything relating to weapons of mass destruction. In case you can’t see where this is going, he was the one most brazenly pushing the false information about Iraq’s arsenal of WMDs, misleading the nation into war.

Since joining the current administration, Bolton has used nearly every cable television appearance to advocate for attacking North Korea or Iran, or pushing for regime change in Venezuela.

Trump recently made the decision to resist the swamp dwelling warmongers that infest DC and opt not to deploy a strike that would have killed 150 people over an unmanned drone. The move was widely celebrated and praised by not only his base, but many independents and people in the anti-war left. Those who wish to see chaos and destruction across the globe are in the minority now, and thankfully, for now at least, the president doesn’t seem to be a fan either.

According to recent reports, Fox News populist Tucker Carlson was one of the people who helped Trump make a decision not to bomb Iran. The anti-intervention cable TV favorite has been an outspoken critic of the Neocons in the administration, particularly Bolton.

On Friday, Carlson blasted Bolton’s penchant for war and referred to him as a “bureaucratic tapeworm.”

“According to John Bolton, [Iraq’s] a raging success. We killed hundreds of thousands of people, lost thousands of our own troops, spent more than $1 trillion all to eliminate a WMD threat that despite John Bolton’s assurances, never existed in the first place,” said Carlson. “Bolton is glad we did all that. Really happy about it. That’s demented. Normal people don’t talk about that. There’s nothing normal about John Bolton,” concluded Carlson.

So, to sum this all up — tough luck, Boot. Nobody is buying the crap you, Bolton and “the ghost of John McCain” are selling. Hopefully it stays that way.