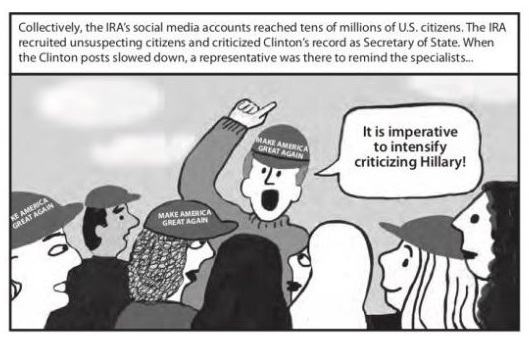 Sneak previews of two upcoming graphic novels based on the Mueller report both reveal artwork as childish as the concept.

Barbara Slate’s upcoming project is titled the “Mueller Report Graphic Novel.” The 72-year-old cartoonist’s work will soon be released in two print volumes, but the previews that have been released will likely leave much to be desired even from the most ardent Trump critics. 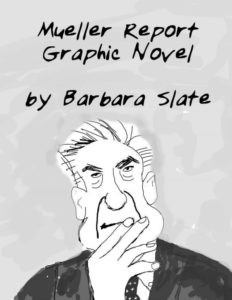 The page she has posted features the Russian Internet Research Agency recruiting unsuspecting citizens to criticize Clinton’s record as the Secretary of State.

“It is imperative to intensify criticizing Hillary!” one ‘Make America Great Again‘ capped character tells the others. “How about she’s an alien?” one character suggests. The cheese factor continues as she writes about the IRA recruiting individuals to walk around New York City in Trump masks and Santa hats.

The comic appears to be lacking comedy, imagination and fun. All of the ingredients that make graphic novels great. When someone picks up a graphic novel it is usually because they want to be entertained — and this comic definitely fails to deliver. 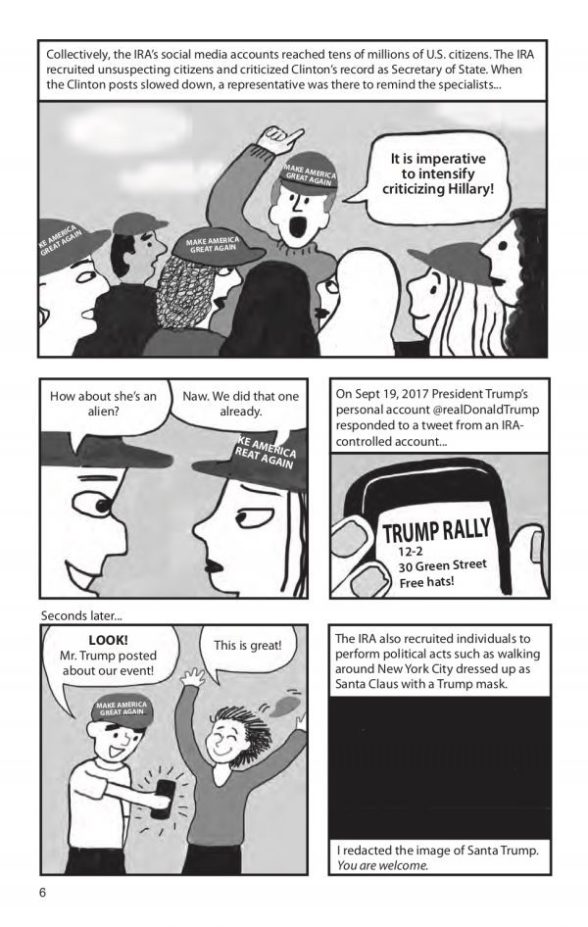 Slate isn’t the only one racing to try and turn the report into a graphic novel.

Cartoonist Shannon Wheeler and journalist Steve Duin are also illustrating the 448-page report. They, like Slate, went with the ultra-imaginative title of “The Mueller Report Graphic Novel.” 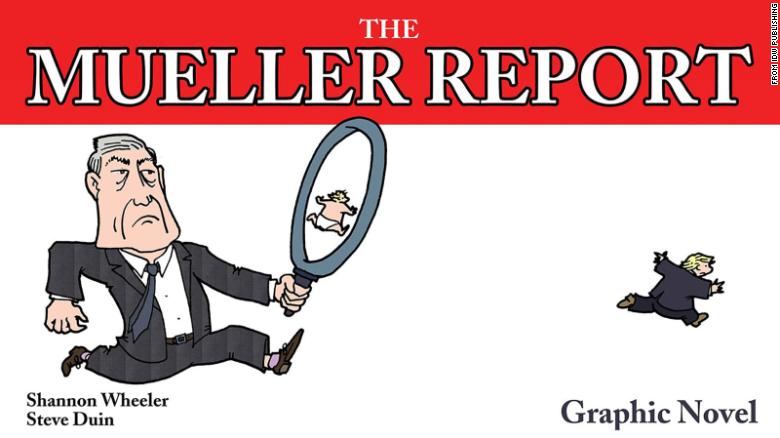 “Fight the spin spewing forth from both parties and political pulpits and check out this graphic novel that brings a 400-page legal document down to size. Wheeler and Duin, in graphic form, bring to life scenes detailed in the report: from the infamous Trump Tower Meeting of 2016 to Trump exclaiming ‘I’m f*cked’ upon finding out he was the subject of investigation. It’s in the report and it’s in the graphic novel!” a press release from IDW Publishing states.

The press release says that the comic will be done in “classic private detective yarns, complete with a villain’s rogues’ gallery, nail-biting cliffhangers, and a lone lawman standing proud against the wave of crime.”

The publisher couldn’t even make their plea for coverage interesting. It asserts that “You’ll laugh. You’ll cry. You may Tweet in anger. But most importantly, you will be reading the report for yourself!”

“It’s the Mueller Report… with pictures… and funny,” explained Wheeler.

It seems as though the “Resist” movement has managed to suck all the joy out of their lives in the process of fighting for the president’s impeachment and it shows in their dreary comics.