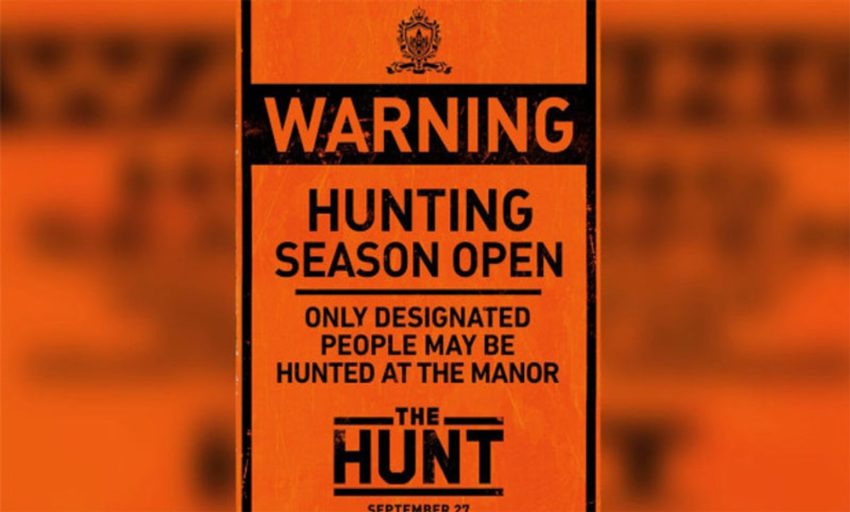 A script that is said to be for the movie The Hunt has been leaked online following the studio’s decision to cancel its release in response to recent mass shootings.

The film, which nobody had seen, drew outrage and criticism from social media commentators, Fox News and even President Donald Trump — based solely on the theatrical trailer. They were wrong and the campaign against this film was a blatant attempt to stifle a film that was obviously meant as a social commentary on the toxic culture surrounding politics today.

Originally titled Red State Vs Blue State, prior to the leak all that was known about The Hunt was that a group of “liberal elites” would be hunting “deplorables.” It would be a modern day telling of a classic Most Dangerous Game or Hostel type action and horror storyline. Though various iterations of this story have been told a hundred times before, conservatives were furious that they were the prey in this update, despite the fact that the protagonist was clearly a “deplorable.” Commentators rushed to claim, without any basis, that this film would incite more violence against Trump supporters. Many believed that it was an evil Hollywood conspiracy to continue normalizing violence against the right.

The actual plot line of the story tells a different tale, one that mocks political violence, social justice warriors, Trump supporters, vegans, and just about everyone and everything else. It throws political correctness right out the window and ironically, a huge portion of the movie is dedicated to mocking the very outrage culture that lead to its cancellation.

The script starts us off with a text exchange in which a group of friends are trying to decide on a restaurant. Soon, a character named Martin asks if anyone saw what the “ratf*cker-in-chief just did.”

A character named Richard responds saying it was “infuriating” and another named Athena chimes in to say “at least the hunt’s coming up. Nothing better than going out to The Manor and slaughtering a dozen inbred rednecks.”

The script cuts to a silent black and white scene, which it describes as “deeply f*cking pretentious.” It’s from Jean Renoir’s classic dark comedy Rules of the Game, a 1939 French film about the moral callousness of the high society elites just before World War II began. It is a film that The Hunt was clearly inspired by and is widely regarded as one of the greatest movies of all time. Renoir described it as a “war film and yet there is no reference to the war.”

Like The Hunt, Rules of the Game was also highly controversial in its time. It was banned during the German invasion for being “morally perilous” and the original negatives were destroyed in the war. The film was not restored and released in full until 1956.

The next scene takes us on a plane, presumably private, where we meet Richard. He’s described as a “middle-aged man in trendy glasses and a scarf he doesn’t need.” He’s annoyed, rude to the flight attendant, deeply unlikable and blatantly liberal. He’s also a vegan.

It is also during this flight that we are introduced to some of the “deplorables” who are scheduled to be hunted, and the writers wasted no time before diving into the gore. Yes, a “deplorable” gets stabbed in the neck with a pen for waking up from being drugged before the hunt actually started — but you can already sense that the liberals are the bad guys in this dark satire and the “deplorables” are not.

The deplorable lives through the pen attack, but Athena, who is clearly in charge of the operation, ends up finishing him off with a stiletto in his eye.

“Her hand reaches into frame — SKLISSSSSSSH! — Slowly pulls the stiletto heel out of Randy’s face. HIS EYE, impaled on the bottom, the OPTIC NERVE CORD still attached until her fingers reach in, gently pinch it, freeing her shoe,” the script describes. Richard protests that her slaughter was unfair because the man didn’t know that he was part of “the hunt” yet, but she shrugs him off by saying “no sentimentality, comrade. War is war.”

The dying deplorable is dragged into a room with the other prey where he whispers to a young woman for help. She, like him, is about to be part of the hunt — but she isn’t awake yet.

The film cuts to the woods where we see the same woman. She’s meant to be an average American or a “deplorable.”

“We see now she’s wearing a TANK TOP and cutoff denim shorts, colloquially known as DAISY DUKES. For now, that’s what we’ll call her. DAISY. And she will be our hero,” the script explains.

She doesn’t actually end up being the hero, as her face is vaporized pretty early on — but a similar character, Crystal (played by Betty Gilpin), does eventually become the heroic protagonist.

There is a lot of gore. Seriously. Think of a really gory film and then imagine even more blood and guts — then double it. This film pretty much sounds like Hostel on steroids. People are impaled, have their heads run over and “flattened like pancakes,” get blown up like “gut-filled piñatas” and worse — and that is only in the first 20 pages.

The script is deeply reminiscent of The Purge franchise, which was made by the same producers, but with some very b-movie style satire. The deplorables find weapons that were left for them, learn they’re in a hunting scenario and have to fight to stay alive.

As the group attempts to figure out what’s going on they refer to it as “Manorgate” and express shock that the conspiracy theory that they read about online was real. It’s a clear nod to “Pizzagate.”

“I saw this article — Every year, these liberal elites… y’know, The globalist cucks who run the Deep State? They kidnap a bunch of normal folks like us and then hunt us for fucking sport at this mansion in like, Vermont or something. I forwarded it to fifty friends… but it’s not like I believed it. Do you believe it?,” one character asks our protagonist.

For example, when one of the hunters began to express remorse after realizing a man he killed was married and might have had a family, his wife comforts him by asserting he was the enemy. “Honey. Twelve arrests for drunk and disorderly. Five for domestic abuse… and he uses the N-word on Twitter,” she says to calm him.

Don’t worry — Crystal, who is a total badass, handles them soon after.

Sure, the film doesn’t just mock social justice warriors, it mocks Trump supporters too — at one point even landing Crystal and her sidekick in a train full of Arab refugees. To see if they’re real or actually secret liberal killers, Crystal tells the refugees that she has a photo of the prophet sucking himself off in her pocket. It’s ridiculous, but funny. Tweeting portions of this script would absolutely get you banned on social media.

Ultimately the refugees die too, except a mother and baby that our MAGA babe Crystal saves. Would a liberal propaganda film have a scene like this?

In one particularly entertaining moment, a liberal hunter is asked by a deplorable if she should be spared because of the fact that she’s a woman. The social justice warrior considers the implications of her answer before saying “no” and having her head blown off. She dies because she is more concerned with being politically correct and a proper feminist than surviving. It’s violent, yet poetic. Truly dark comedy about modern day activism. 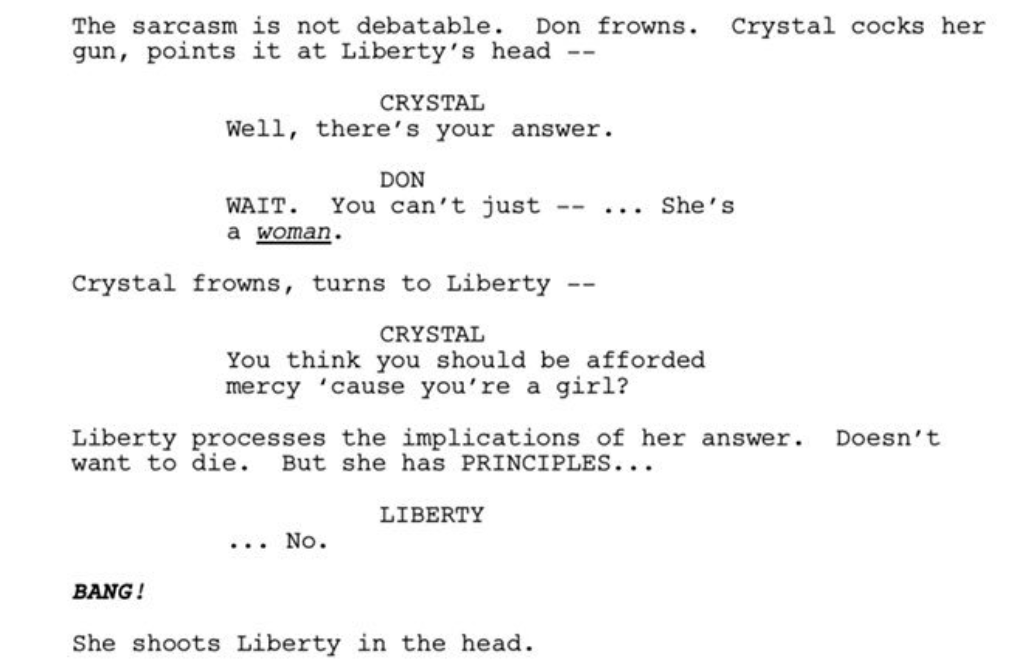 This film mocks everyone and doesn’t hold back. It’s certainly not made for those with queasy stomachs or who are easily offended, but what fun movies are?

With Troma-esque gore, and violence that would surely make Eli Roth proud, there is no way this movie would be a mainstream blockbuster. It would most certainly amass a niche cult following a la Toxic Avenger, however. Especially now that it’s been branded as being so “dangerous.”

Like guns and ideas, movies don’t kill people. Crazy people kill people. Censoring art and media won’t change that — especially when you make assumptions and get it this wrong.