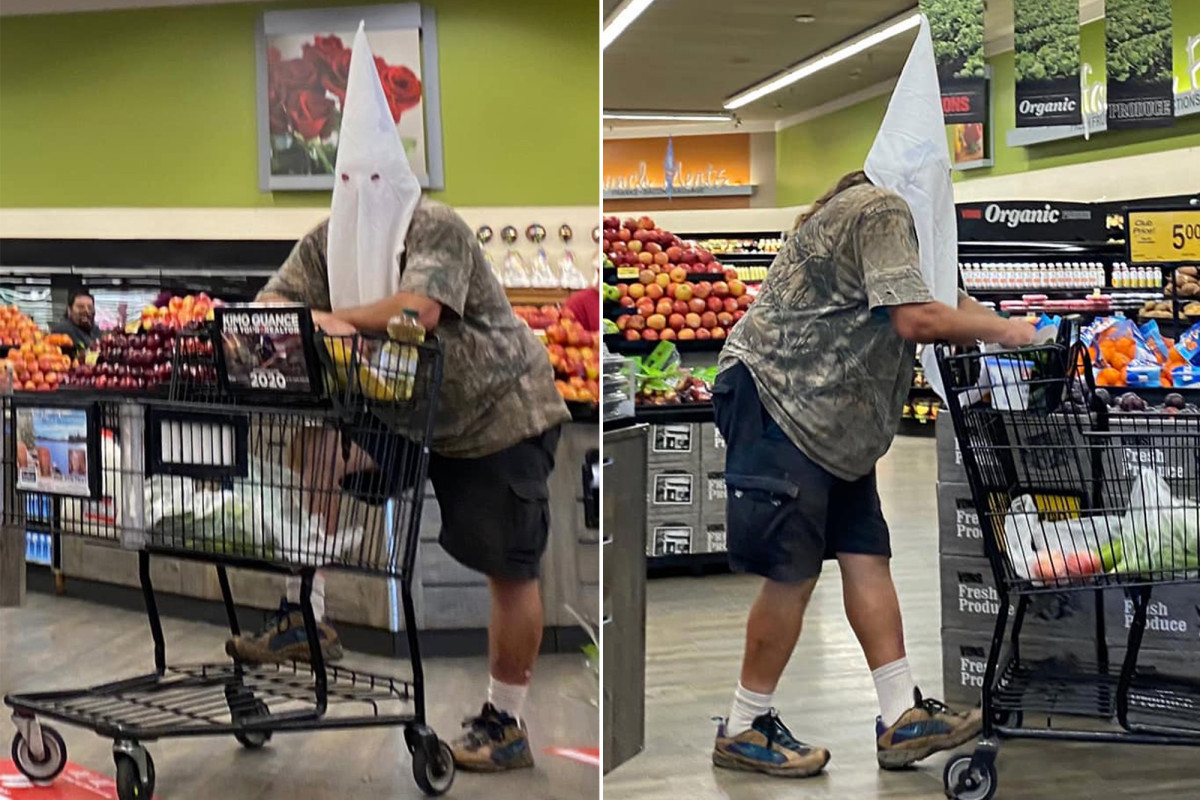 A California man who went grocery shopping in a Ku Klux Klan hood won’t face charges, the police have announced, because the First Amendment still exists.

The Supreme Court has repeatedly ruled that hateful speech is protected under the First Amendment.

The man sparked a social media outcry earlier this month after being photographed shopping in the hood at a Vons supermarket in Santee, California.

A man grocery shopping with a KKK hood in Santee, California. The city of Santee has a history of racism & people in southern California call it 'Klantee'. This is Trump's America. pic.twitter.com/AYRdnMVnXK

In a statement, the San Diego County Sheriff’s Department said that they interrogated the man.

“On Saturday, May 2nd , a man entered the Vons in Santee wearing a white pointed hood. Investigators with the San Diego County Sheriff’s Department were contacted and have interrogated the man who wore the hood. The man expressed frustration with the coronavirus and having people tell him what he can and cannot do. He said that wearing the hood was not intended to be a racial statement. In summary he said, ‘It was a mask and it was stupid,'” the statement read.

Naturally, photos of the shopper circulated with outraged members of the public demanding he face charges.

Santee Mayor John Minto also condemned the man — and told CNN that he “will not tolerate such behavior,” despite the fact that hate speech is a constitutional right.

“Santee, its leaders, and I will not tolerate such behavior,” Minto said. “Santee and its citizens are great, and this particular individual’s actions are not representative of us as a people and a wonderful city.”

The sheriff’s, however, said that “it was determined there was insufficient evidence to charge the man who wore the Ku Klux Klan hood inside the store.”

The U.S. Supreme Court has said that “[s]peech that demeans on the basis of race, ethnicity, gender, religion, age, disability, or any other similar ground is hateful; but the proudest boast of our free speech jurisprudence is that we protect the freedom to express the thought that we hate.'”

Despite the fact that the man broke no laws, the department criticized his actions. Their statement concluded “that said, this incident should serve as a reminder for anyone contemplating wearing or displaying items so closely associated with hate and human suffering that our society does not hold in high regard those who do so. Santee is a city of families and the community is rightfully disgusted at this man’s despicable behavior. The Sheriff’s Department thoroughly investigates incidents such as these and will hold those who violate the law accountable.”

In 2012, the American Civil Liberties Union defend the KKK’s right to free speech, saying that if you do not protect the free speech of all, you risk the government dictating what is considered acceptable speech.

“Defending the rights of groups that the government tries to censor because of their viewpoints is at the heart of what the First Amendment and the ACLU stand for, even when the viewpoints are not popular,” Brenda L. Jones, executive director of the ACLU-EM, said at the time. “If we don’t protect the free speech rights of all, we risk having the government arbitrarily decide what is, or is not, acceptable speech.”