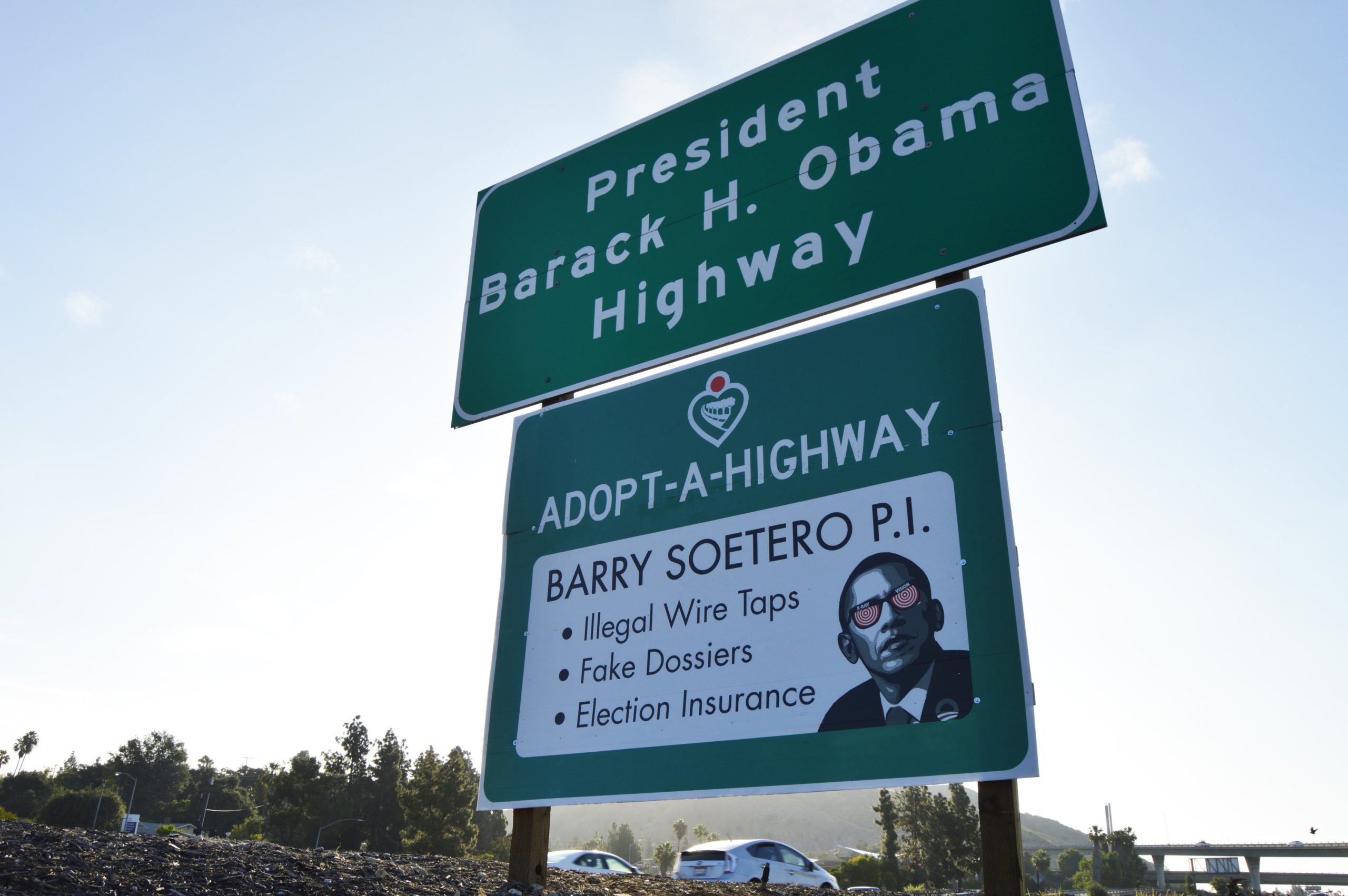 On Tuesday, the Los Angeles-based artists put up a sign on a portion of the 134 freeway that was named after the former president in 2018.

The artists describe themselves as a “rogue right-wing street outfit” that is “100% pro-individualism and meritocracy and 100% anti-identity politics.”

Today, we decided to help @BarackObama get some exposure on his side hustle. Good luck big guy!#ObamaGate pic.twitter.com/CmO0IJJKQL

The sign features an image of the former president and reads:

Speaking to the District Herald, a spokesperson for The Faction said that “in 2018, it became obvious to anyone paying attention that there was no way President Obama wasn’t aware of or hadn’t implicitly encouraged the attempted coup that plagued Trump’s transition into the white house.”

“Clearly not paying attention, California named a section of the 134 freeway after him,” they continued. “In response, we made this sign. That was over a year ago. We’ve been sitting on it until now — until the obvious truth that Obama was involved in a coup attempt could no longer be covered over by show trials and impeachment hoaxes. Though we hold little hope that Obama will ever have to answer for his treasonous acts, we want him to know that we see him.”

Social media users have claimed for some time that a photo of Obama’s student ID card while he was at Columbia University used the name “Barry Soetoro” and had the words “Foreign student” underneath in capital letters. The image of the ID appears to have belonged to another student which was later edited.

Nicknamed “Obamagate,” the scandal over the former president’s involvement in the “Russiagate” hoax has exploded in the past week — after it was revealed that President Obama, in his final days in office, played a key role in the hoax.

“Fully briefed on the ‘Crossfire Hurricane’ investigation, he knew the FBI had come up with nothing despite months of work starting in July 2016,” the New York Post reported. “Yet on Jan. 5, 2017, Obama told top officials who’d be staying on in the new administration to keep the crucial facts from Team Trump.”

To raise awareness of the controversy in the ultra-liberal city, the Faction got to work with their signature brand of street art.

Who did this? #Obamagate pic.twitter.com/D25aXr0r2Z

After we fixed @billmaher’s billboard last month, we didn’t want @iamjohnoliver to feel left out. 🙁

The rebel artists also once plastered stars for President Donald Trump all over the Hollywood Walk of Fame after his real one was vandalized with a sledgehammer.

“Keep it up, ‘Resistors’, we’re going to ride your baby-tantrum tactics all the way to victory in 2020 and beyond,” the Faction said in a statement at the time of their Walk of Fame makeover.

Keep taking down the @realDonaldTrump star, and we will further spread Trump Derangement Syndrome by installing a never ending stream of stars. pic.twitter.com/6s0Y3YIkY5

To celebrate Valentine’s Day, the group posted giant signs that read “It’s Okay to Love Trump,” at busy intersections in the city.