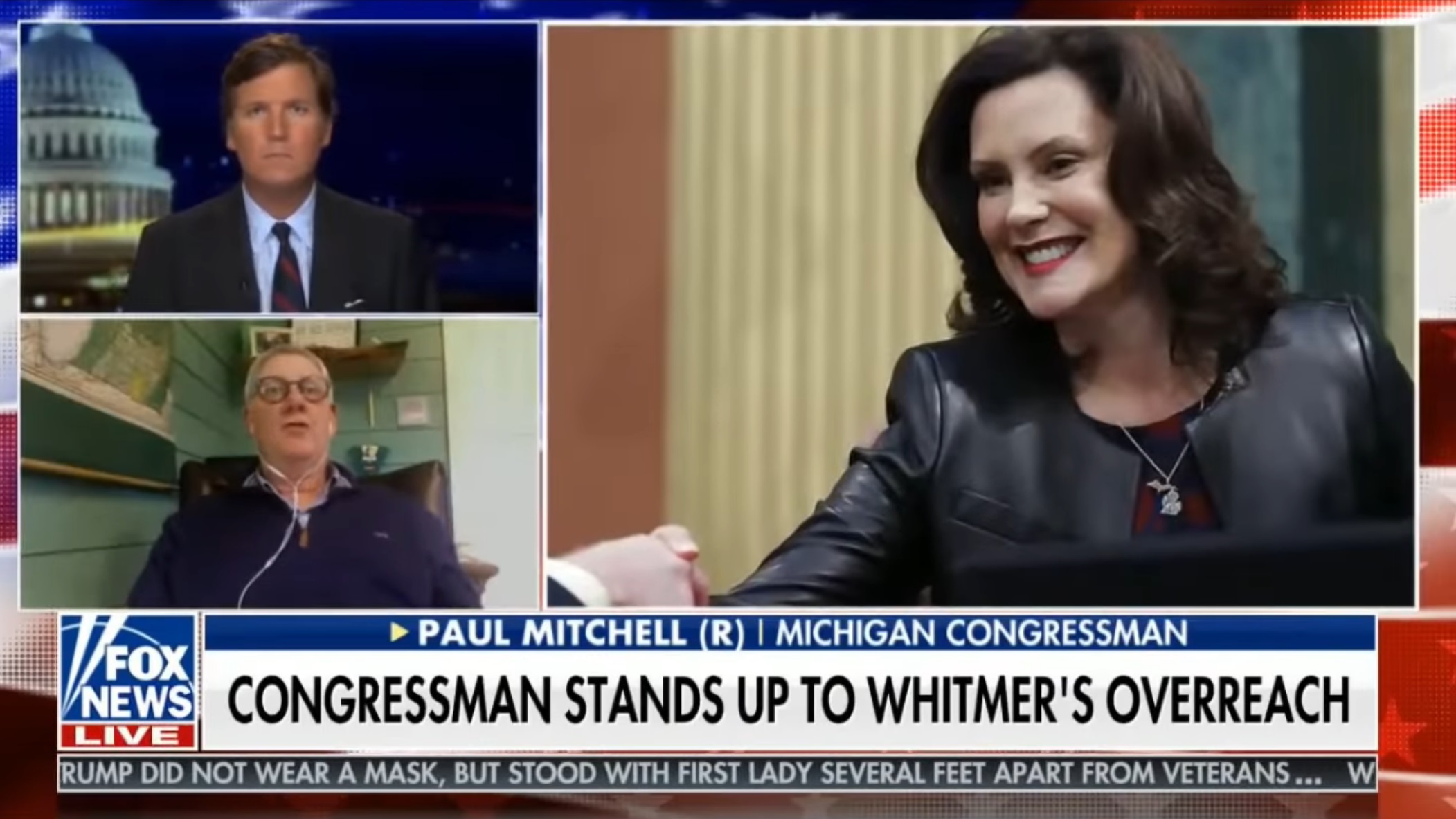 Republican Michigan State Representative Paul Mitchell ripped into Governor Gretchen Whitmer for bulldozing the constitutional rights of her constituents during his appearance on Tucker Carlson Tonight.

Rep. Mitchell is currently suing Governor Whitmer for violations of the U.S. and Michigan constitutions, as well as the state law.

While appearing on Fox News, Rep. Mitchell said that she has “decided to bulldoze the constitutional rights we have in the state.”

“Our governor has decided to bulldoze the constitutional rights we all have in the state,” Mitchell said. “For example, going across the state to visit your grandchildren was prohibited, now it’s allowed. But it can be changed.”

The representative continued on to blast Whitmer for changing the rights that the people of Michigan have on a “week to week basis” and closing off parts of stores while allowing the business to stay open in general.

“Any rights we have can be adjusted by the governor on a week to week basis, which she’s done in some areas,” added Mitchell. “So, even the right to go get medical care is limited. Your ability to go, as I said, up north to your house, to shop for certain things at points in time, she had actually closed off parts of stores because it was not appropriate to shop for paint for your house, for example.”

Mitchell also blasted the fact that you can currently get an abortion in the state, because she deemed them to be “essential,” but you can’t get medical care such as a knee surgery.

“I couldn’t get consultation for healthcare for my knee, but you could get an abortion,” said Mitchell. “She was making unilateral decisions that most of us in this country depend upon a legislature and a court system to do for us, but she used all of government, at this point in time.”

In the lawsuit Mitchell filed in a federal court in Grand Rapids, he said that “Michiganders can and do take reasonable, private action to protect themselves from infection without the need to shut down civil society.”

“Given that the projected surge has not occurred, there is no basis, either legally or factually, to continue any further mandatory lockdown orders.”

Governor Whitmer is currently being sued by a group of churches in the state who claim that her order violates the First and Fourteenth Amendments of the Constitution.

Under Whitmer’s orders, gatherings of two or more people who are not part of the same household are prohibited, including at religious services until May 28, 2020.

According to her order, religious institutions and their owners are exempt from legal penalty, but people who attend the services are not.

The lawsuit states that while “’neither a place of religious worship nor its owner is subject to penalty under section 20 of this order for allowing religious worship at such place,’ nothing in this provision applies to individuals attending a place or worship as clergy or congregants and does not apply to Plaintiffs.”

“This case seeks to protect and vindicate statutory and fundamental constitutional rights. Plaintiffs bring this civil rights action under the First and Fourteenth Amendments to the United States Constitution and 42 U.S.C. § 1983, and for other statutory and constitutional violations, challenging Defendant’s EOs, acts, policies, and regulations which deprive Plaintiffs of their rights,” the lawsuit continues.

To rectify the situation, the lawsuit is asking the court to issue a permanent injunction against the order.