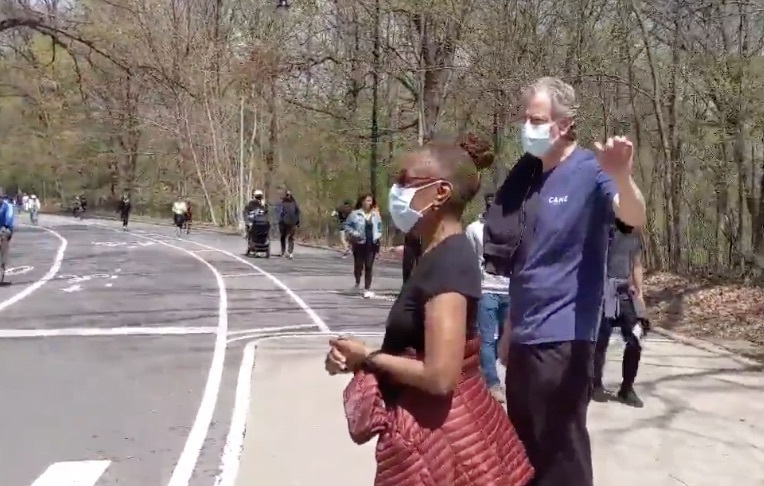 New York City Mayor Bill de Blasio and his wife Chirlane McCray were confronted by an angry resident for breaking his own stay-at-home order to go for a stroll in a Brooklyn park.

The couple was strolling through de Blasio’s favorite park, Brooklyn’s Prospect Park,  which is 11 miles from his residence in Manhattan.

The protester, Darren Goldner, posted a video of himself confronting the couple for breaking the rules they have imposed on everyone else in the city.

I live right near Prospect Park. It's a nice place to exercise at distance. Today, I ran into @nycmayor @billdeblasio w/ @nycfirstlady there.

But they live 11 miles away *inside* another park and force a 4 SUV entourage to drive them non-essentially to Bklyn for recreation (1/n) pic.twitter.com/4BLjSotw2n

“Seriously, you guys have a park. You live in the middle of a park. You don’t need to non-essentially travel to Brooklyn,” the protester demands in the video. Gracie Mansion, the mayor’s residence, sits inside Manhattan’s Carl Schurz Park.

The mayor told Goldner to “give it a break,” prompting him to point out that nobody else is getting a break while de Blasio prances around the city.

“Come on, you won’t even open roads for people of all backgrounds,” Goldner shot back. “I’m not going to give it a break. This is selfish behavior. This is so terribly selfish. You call yourself a progressive, but you chauffeur yourself to Brooklyn. You force people to drive you.”

You can't change the past & will always have blood on your hands.

If I were you, I'd be working night & day to help those in most dire need. Maybe start with your inadequate homeless services. pic.twitter.com/i71ulg7Hvl

Goldner continued to follow the couple through the park as members of the mayor’s entourage tried to block him from getting by. At one point, one of de Blasio’s aides swoops right in front of the protester nearly stopped — breaking yet another rule of the social distancing orders.

“You’re getting too close to me to be socially distant,” Goldner pointed out.

#MeToo, But Not Her: Hypocrite Sen. Gillibrand Says ‘I Stand By Vice President Biden’ Despite Credible Sexual Assault Allegation