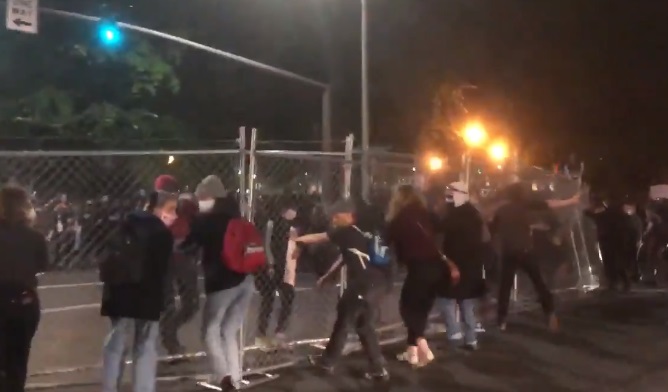 Militant leftists in Portland are now attempting to set up their own “autonomous zone,” free of police, after the Seattle version was overtaken by an armed “warlord” just one day in.

One of the leaders of the Seattle version has also already been accused of sexual assault and threatened to commit suicide after admitting that they are a “serial abuser.”

Portland Police have been attempting to discourage the construction, but were being ignored as of 11:30 p.m. local time.

In Seattle, six square blocks surrounding the abandoned Seattle Police Department East Precinct have been under the control of militant leftists for several days. Within the first 24 hours, an armed Airbnb Superhost named Raz Simone took control of security operations and has been accused of using violence in multiple livestreamed incidents. He has been accused of running the area like a “warlord.”

“While Washington is an open carry state, there is no legal right for those arms to be used intimidate community members,” Seattle Assistant Police Chief Deanna Nolette told KOMO News.

There are also allegations that Simone’s team have been extorting local businesses in the area, demanding $500 protection fees.

“We have heard anecdotally of citizens and businesses being asked to pay a fee to operate within this area, this is crime of extortion,” Nolette said.

Simone has denied the allegations saying there’s “definitely no extortion, definitely nothing of that,” adding, “we’ve invited people to come in.”

The chaos caused by the autonomous zone has impacted how police can respond to calls in the city.

“Right now, we are on priority calls only, which means the people, city wide who need a police response are not receiving it,” Nolette said. “That to us is just not acceptable.”

The “warlord” isn’t their only problem, Nationalist Review reports that according to at least two exes and one current partner, the “trans lesbian” leader of the autonomous zone has repeatedly abused the women that they’ve been with.

One of the leader’s previous partners wrote, “I’m her ex. Even if she isn’t doing it consciously, she has done things like this on multiple occasions, including assaulting [people], and, despite acknowledging she’s in the wrong, has refused treatment. She has threatened suicide numerous times. She’s not being gaslit.”

Another former partner explained that just recently the leader had physically and sexually assaulted them, saying “You punched me in the f***ing face a few days before you shoved me off the bed for making a sh*t joke. I constantly push your hands away and tell you to stop touching my chest. One time I told you to stop and you cried and got all depressive.”

There are also reports that they are running out of food and having problems with theft, leading to them seeking more security.
Related Topics:Autonomous ZonefeaturedPortlandRiotsSeattle
Up Next