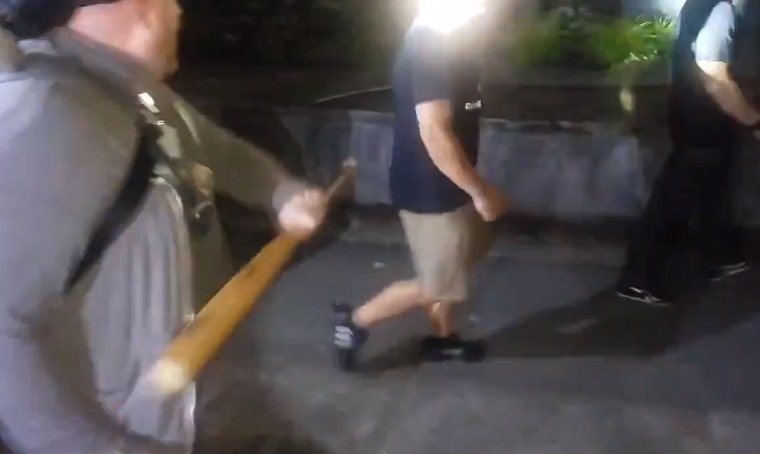 A Portland Black Lives Matter rioter assaulted a counter protester with a baseball bat during Saturday night’s riot in the city.

Portland has been plagued by violent riots every night for nearly three months straight.

In shocking footage captured by Daily Caller reporter Jorge Ventura, a mob of militants are seen chasing people off that they declared to be “fascists” and “Nazis,” without any basis of course.

The man with the bat was also seen spitting on the men after another rioter threw a bottle at them.

Soon after the spit, the large rioter began hitting and jabbing one of the men with the bat and declaring “you came to the wrong f-cking party.”

The rest of the mob was shining lasers and bright lights in the counter-protesters’ eyes — a tactic that they have been using in an attempt to blind police officers and anyone else who disagrees with them politically.

A riot was declared shortly after the baseball bat attack.

This is what they've brought to people's front yards #People pic.twitter.com/PGDrmkd7JE

People are continually throwing softball size rocks, glass bottles and other objects at police. People have spray painted over security cameras and committed other acts of vandalism. People are trespassing on the property.

Puny & frail #antifa militant with a skateboard tries to go head to head with PPB officer is easily pummled. After 20 warnings. pic.twitter.com/JG4MB7MrDi

The city has been in chaos for nearly three months as local politicians continuously work against the police and enable the rioters. Night after night, officers are hit with mortars, projectiles, and strange liquids — without seemingly any support from community leaders.

Earlier this week, the Portland District Attorney’s Office announced that they will not be prosecuting rioters for most offenses, dropping cases against hundreds of the criminals.

Multnomah County District Attorney Mike Schmidt announced that they will only be prosecuting those who are arrested for crimes that don’t involve “deliberate” property damage, theft, force against another person, or threats of force. Charges being dropped include interfering with police, disorderly conduct, criminal trespass, escape or harassment.

Schmidt also seemingly gave the militants the go ahead, saying that these relaxed rules will apply to future rioters who are arrested as well.