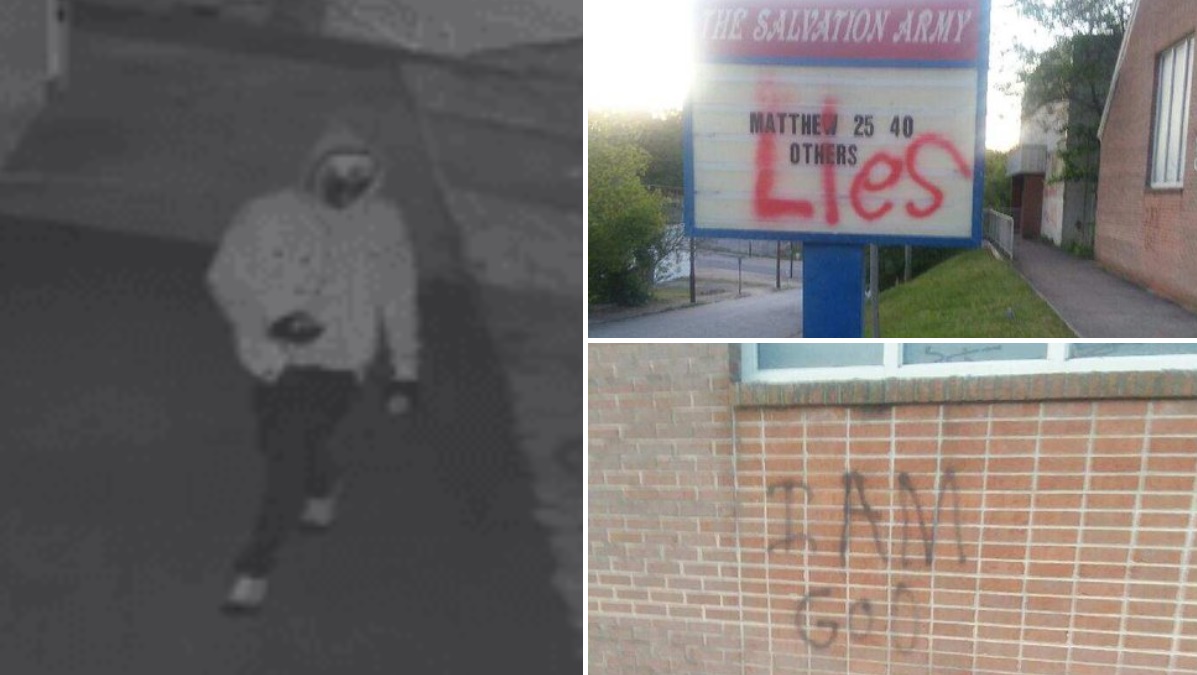 Three teenagers have been arrested for vandalizing a Salvation Army and several other buildings in Virginia with anti-Christian messages.

The trio is accused of targeting the Danville Salvation Army building on Henry Street the night of April 21 with messages such as “I am God” and “lies” sprayed over a bible verse on their sign.

Antonio M. Doroteo, 18, and Sierra J. Austin, 19, and an unnamed 15-year-old were arrested and charged for the crimes after being caught by the Salvation Army’s surveillance camera. 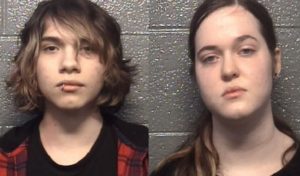 Doroteo and Austin, both of Danville, are each charged with wearing a mask while committing a crime, contributing to the delinquency of a minor and two counts of vandalism.

“The police department said the same suspects also defaced another building in a separate incident in the same area and the 15-year-old acted alone in defacing a third building. Police charged the suspects in those cases as well,” the local ABC 13 News reports.

The minor has been charged with three counts of vandalism. 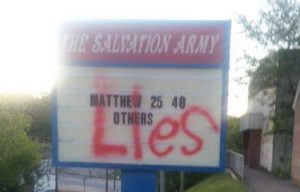 Doroteo and Austin have been released on bond and the minor was released to his parents.

The Salvation Army has been the target of extreme disdain from the left for being a religious organization.

Attacks on the Salvation Army ramped up after former Democrat presidential candidate Pete Buttigieg was photographed ringing a bell for them. This prompted immediate outcry when the woke mob decided that they were bad for being religious and not pro-LGBT enough.

“Pete Buttigieg Volunteered for the Homophobic Salvation Army,” a headline in the gay magazine Out read.

Shortly after the scandal, in December, an 85-year-old man who had raised over $100,000 for the Salvation Army was banned from collecting donations outside a Seattle Nordstrom. The retail giant claimed that his presence was making people “uncomfortable.”

Just before Christmas, a fleet of Salvation Army vans in Kansas City were sabotaged, leaving them unable to deliver holiday meals and toys for underprivileged children.

The left also bullied Chick-fil-A into stopping their donations to the organization.

Additionally, the city of Seattle conducted an “equity audit” to make sure that Salvation Army shelters were not discriminating against trans people by refusing to allow transgender people to stay in women’s shelters.

“The city of Seattle, which like King County, contracts with The Salvation Army to provide homeless shelters, will next month begin an ‘equity audit’ in response to ‘concerns expressed by the community that Salvation Army is not a safe place for LBGTQ persons experiencing homelessness,'” wrote Jason Johnson, acting director of the city’s Human Services Department, in a letter to Salvation Army officials in early December.

The Danville location is currently serving meals to nearly 100 people per day as one in four people are out of work due to the virus.